Behind the orbit of Neptune, a large dwarf planet 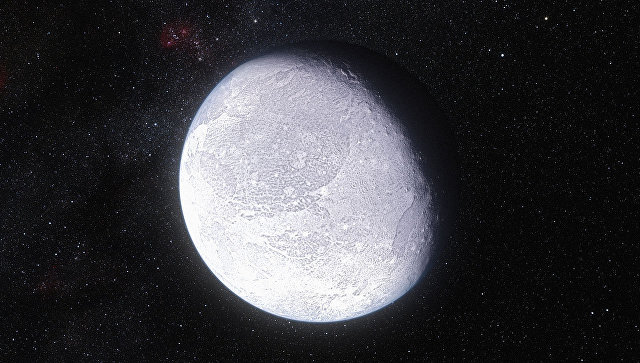 Astronomers have discovered on the distant approaches of the solar system previously unknown dwarf planet JO179 with an unusually inclined orbit, whose diameter is an impressive 900 kilometers, according to an article posted in the electronic library arXiv.org

“This dwarf planet is unusually bright for typical inhabitants of the Kuiper belt, but the high angle of its orbit, exceeding 30 degrees, did not allow our colleagues to find it earlier.” Its discovery shows that the discovery of other dwarf planets will require very “wide” sky surveys, affecting not only the plane of the solar system, but also the area under and above it, “said Michele Bannister of the University of Belfast (UK).

In recent years, scientists have discovered several large dwarf planets and objects on the distant approaches of the solar system, clearly showing that the “life” in it does not end beyond the orbits of Neptune and Pluto, and that large celestial bodies continue to meet even farther away.

So, in 2014, planetologists Chad Trujillo and Scott Shepard announced the opening of the “Biden” – the plutoid 2012 VP113, moving away from the Sun by 12 billion kilometers, and in 2015 they discovered a dwarf planet V774104, departing from the star even further. At the beginning of last year, hints were found for the existence of a giant “planet X” and found a dwarf planet 2015 KH162, the year in which it lasts 500 years.

A year ago, Bannister and her colleagues broke the record of Trujillo and Shepard by opening a small planet 2015 RR245 – a plutoid with a diameter of supposedly 700 kilometers, moving away from the Sun to a record 120 astronomical units, or 18 billion kilometers.

Bannister and her colleagues unexpectedly discovered another large and rather distant dwarf planet behind Neptune’s orbit, studying archival images and data collected by the Pan-STARRS 1 automated telescope, designed to search for asteroids, comets and other small celestial bodies.

Scientists drew attention to the fact that this telescope “looked” not only on the plane of the ecliptic, the “pancake” of the solar system, inside which practically all its planets live, except Pluto, but also on large enough areas above and below it. Here in the distant past, many comets and asteroids were thrown out, orbiting today around the sun in an orbit inclined toward the ecliptic.

Jupiter, Saturn, Uranus and Neptune, as astronomers now believe, arose not on their current orbits, but on the distant approaches of the solar system, from where they migrated toward the star in the first moments of their lives. These “planetary migrations” had to throw dozens of large dwarf planets out of the ecliptic, and make them rotate around the sun like comets and asteroids from the interior of the solar system.

The younger “brother” of Pluto

Guided by this idea, the scientists analyzed and reformed the data and images from the Pan-STARRS 1 database in a special way, hoping to find similar dwarf planets on them. It was not easy to do this, because this telescope periodically switches to new areas of the night sky, because of what it can track only the movement of the slowest dwarf planets.

Despite such limitations, astronomers quickly discovered the first such dwarf planet, the 2010 JO179, whose size allows it to enter the twenty largest “cousins ​​of Pluto.”

The high brightness of this dwarf planet enabled scientists not only to measure its dimensions – about 600-900 kilometers, but also to determine its shape, calculate the length of the day on it and reveal some features of its surface.

It turned out that 2010 JO179 rotates around its axis slowly enough for a dwarf planet – the day lasts about 30 hours, and one of its sides is darker than the opposite, like Pluto and its bright “heart”, surrounded by dark mountains. In its form, this dwarf planet is more like a ball than an ellipse or any other irregular shape.

The most interesting aspect of this planet, as the researchers note, is not its physical properties or dimensions, but its orbit. As their calculations show, it is in orbital resonance with Neptune – for the time that 2010 JO179 spends on five turns around the Sun, the giant planet flies exactly 21 times. Accordingly, the year on the “younger brother” of Pluto lasts about 700 years.

The existence of such a connection between Neptune and 2010 JO179, according to Bannister and her colleagues, may not be an accidental thing. According to scientists, the orbit of this dwarf planet can conceal traces of Neptune’s migration in the distant past. Therefore, the search for other planets with a similar orbit can help astronomers understand how the Earth and other plan originated