Benn’s asteroid has had strange emissions 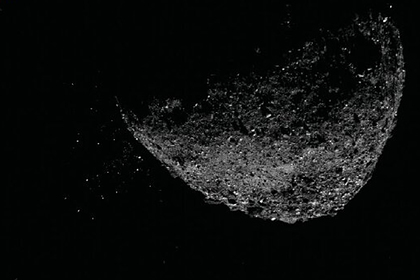 Scientists at the University of Arizona in the U.S. have uncovered the mysterious behavior of the potentially dangerous to the Earth asteroid Bennu, who constantly throws particles of his substance into space. This is reported in a press release on Phys.org.

Specialists involved in the project OSIRIS-REx, observed three large emissions of particles that occurred in different places on the asteroid surface in the southern hemisphere and at the equator. After the release, the particles either flew around the celestial body and fell back to the surface or flew into space. Their speed was three meters per second and their size reached 10 centimeters.

Several possible explanations for the emissions have been suggested: meteorite strikes, thermal destruction and water vapour escape. Thermal destruction can occur due to sudden changes in surface temperature during the rotation of the asteroid, which is equal to 4.3 hours. This process also contributes to the shredding of rock particles, which can more easily leave the celestial body.

OSIRIS-REx is an interplanetary station designed to deliver soil samples from the Bennu asteroid. The collection of material is planned for the summer of 2020, and the samples will be delivered to Earth in September 2023.