Beta Pictoris’s second planet was photographed for the first time 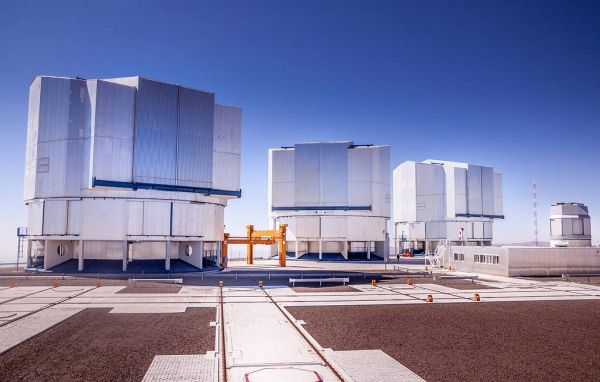 Planetologists have confirmed that there is a second planet in the Beta Pictoris star system, and took its first pictures using the instruments of the VLT optical telescope. The research results were published in the scientific journal Astronomy and Astrophysics.

“We first confirmed the existence of the planet in two different ways, direct observations and the method of radial velocities. This means that now we can accurately measure both the brightness and the mass of this exoplanet and check how both of these properties are related,” said one of the authors of the work , planetary scientist from the Cambridge Institute (UK) Matthias Novak.

The star Beta Painter is located 64 light years from the solar system. It is a yellow dwarf star, the second brightest star in the constellation Painter. Beta Painter and her entourage are very young: their age does not exceed 20 million years.

The study of this star system began in detail 40 years ago. Then astronomers discovered that it produces an unusually high amount of infrared radiation. Later, scientists found out that the source of this radiation is a gas and dust disk, inside which there is a planet – beta Painter b. Its first photographs were received by the Hubble Space Telescope in 2009.

Due to its large size, as well as the small distance between this planet and the Earth, the Beta Painter system has become one of the main goals of planetary research. For example, scientists recently measured the orbital inclination of this planet, and also found hints of the existence of another planet, Beta Painter c, which is located a short distance from the star.

Novak and his colleagues confirmed the existence of this planet, and also calculated its size and some other properties using the GRAVITY interferometer, one of the instruments of the VLT telescope. This instrument combines the four main VLT units into a giant virtual telescope that can capture images at record high resolution and sensitivity.

With the help of GRAVITY, planetary scientists observed areas in the vicinity of Beta Painter, through which they believed the second planet could orbit. To determine its position, scientists monitored how strongly the nature of small movements of the star across the sky was influenced by the gravitational interactions between it and the planet beta Painter c. For this, scientists used the radial velocity technique.

Further observations with VLT and GRAVITY confirmed that there are indeed two planets orbiting Beta Pictoris. The first, beta Painter c, is about eight times heavier than Jupiter and is about the same distance from the star as the central part of the solar system’s main asteroid belt.

The second planet, beta Painter b, is much larger than its neighbor – it is 11 times heavier than Jupiter, and at the same time is 3.5 times farther from the star than the smaller gas giant. Given the large difference in the strength of the planets’ glow, scientists suggest that in fact, the second planet in Beta Painter may actually be even larger.

However, it is difficult to test this hypothesis, since modern methods allow this to be done only using the transit method. Its essence is to estimate the size of an exoplanet when it temporarily obscures the light of the star around which it revolves from the observer. But beta Painter c, unfortunately, is too far from the star and orbits it once in 26 years.

Nevertheless, even now, according to Novak and his colleagues, thanks to the discovery of these planets and their first photographs, astronomers can significantly narrow down the possible list of theories that describe the formation of such gas giants. Scientists hope that further observations will help them learn the secrets of the formation of such planets and understand how Jupiter, Saturn and other objects in the solar system originated.