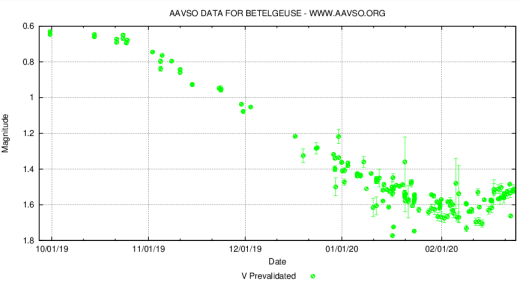 Betelgeuse brightens again. Researchers at Villanova University, who have been researching an unprecedented drop in Betelgeuse’s brightness, have confirmed that the star is gaining brightness.

It has been suggested that the recent eclipse was an unusually deep excursion into the natural 430-day periodicity of the star.

According to the light curve, Betelgeuse reached brightness during the week of February 7–13 with a magnitude of V slightly greater than +1.6.

“Based on these and additional observations, Betelgeuse definitely stopped fading and began to slowly brighten,” said Ed Guinan from Villanova University. “So this episode of” fainting “is over.”

However, monitoring should continue. The sensational shots taken last month by the very large ESO telescope in Chile showed that one half of Betelgeuse is fading more than the other.

No one knows why. Additional visualization during Betelgeuse’s recovery may reveal this mystery.