Betelgeuse has absorbed the next star 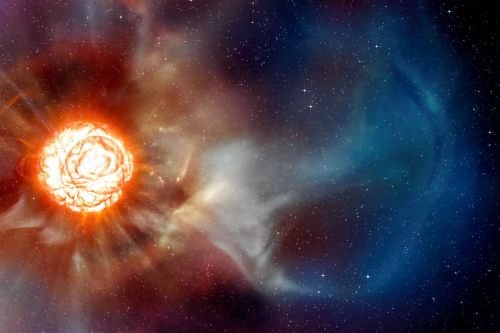 One of the biggest stars in the sky, a supergiant of Betelgeuse, differs in the mad speed of rotation. According to scientists, it can specify the absorption of a star neighbor made less than 100 thousand years ago.

Betelgeuse – a red supergiant on right (for the observer – left) a shoulder of Orion. It is one of the largest stars known to astronomers: by different estimates, diameter it can be comparable with an orbit of Mars, and it is possible, and Jupiter. Betelgeuse exclusively “friable”, it is only 13-17 times heavier than the Sun so its brightness falls to edges quite smoothly, complicating exact assessment of the sizes.

At the same time they constantly decrease: for the last a couple of decades diameter of Betelgeuse was reduced almost by 20 percent. There is no reliable explanation for this phenomenon yet though it is considered that sooner or later it will end with explosion of supernew. It can occur and tomorrow, and through one thousand years – and will become grandiose (and quite safe) an astronomical event. And waiting for this show astronomers continue to study the unusual giant.

The new results received by team of the astronomer of the Texas university Craig Wheeler prepare for the publication in the new journal number Monthly Notices of the Royal Astronomical Society, however are already available on service of pre-prints ArXiv. By means of computer modeling scientists specified rotation of Betelgeuse, having found, as here he behaves not as a regular supergiant. As a rule, increasing in the diameter, such stars slow down rotation (as the figure skater, moving apart hands). Betelgeuse makes revolutions of time in 150 quicker round its pivot-center, than shall – external layers of a star move at an impressive speed to 15 km/s.

Work of Wheeler and his colleagues brought a new riddle of Betelgeuse, there is no explanation for its accelerated rotation too. Scientists assume that the star neighbor, the sizes approximately about the Sun could cause. Once it was near Betelgeuse, but was absorbed by it in the course of growth and together with the substance transferred to a supergiant and the impulse. If this is so, then this absorption owed be followed by emission of a part of substance. Calculations allowed to estimate approximately the speed and time of this emission – and to calculate where this substance can be now. And it is valid: Wheeler with coauthors found out that the cloud suitable under these parameters is observed in the pictures of Betelgeuse made in 2012.