Betelgeuse was closer to Earth and smaller than scientists thought 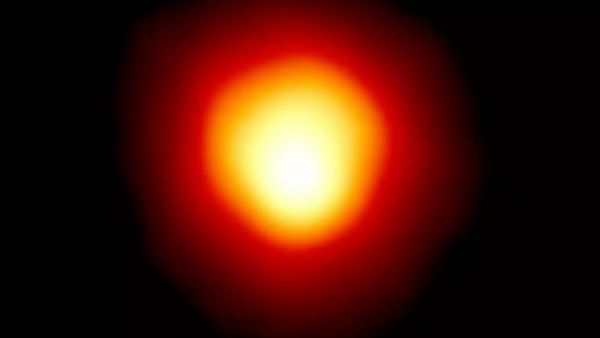 Astrophysicists have measured the exact distance to Betelgeuse and the speed of rotation of this star. It turned out that its diameter is one-third smaller than scientists assumed, and the star itself is 25% closer to the Earth. An article describing the study was published by the Astrophysical Journal.

“The size of Betelgeuse has always been a mystery. According to previous estimates, its radius is approximately equal to the distance between the Sun and Jupiter. We found that it is about a third smaller – 750 solar radii. That is, Betelgeuse is only 530 light years away from us,” said one from the authors of the article, astrophysicist from the Konkoy Observatory (Hungary) Laszlo Molnar.

Betelgeuse is one of the largest and brightest stars in the sky. It is located in the constellation Orion. Betelgeuse can be seen with the naked eye due to the fact that it is at a short distance from the Earth, as well as its enormous size and mass. Scientists believe that it is 15-25 times heavier than the Sun. Prior to the discovery of Molnar and his colleagues, astronomers assumed that if Betelgeuse were in the center of the solar system, its outer layers would reach roughly the same regions where Jupiter’s orbit is.

Betelgeuse is at the last stage of stellar evolution – the stage of a red supergiant. This is what scientists call “aged” stars, which have almost run out of hydrogen reserves. At this stage, the stars expand sharply and begin to dump the material of the outer shells into open space. The result is huge dust clouds and bright gas and dust nebulae.

In particular, at the end of last year, the brightness of Betelgeuse began to fall rapidly, having decreased by 63% by January of this year. In mid-spring, the star’s luminosity returned to its previous values. The exact reasons for this tarnishing are still unknown. Scientists speculate that it was associated with the release of a powerful cloud of dust. Later, Betelgeuse experienced another similar episode, the reasons for which astronomers continue to argue.

Molnar and his colleagues tried to figure out these reasons by observing Betelgeuse using the SMEI coronagraph, which is installed on board the US Coriolis satellite. Astronomers use this instrument to study the radiation emitted or reflected by objects around Betelgeuse, including potential dust clouds.

SMEI data show that the second dimming of Betelgeuse was caused not by a dust cloud, but by processes in the bowels of the star. They are related to how thermonuclear reactions take place in its core. This does not mean that Betelgeuse will soon go supernova, scientists say. According to their estimates, this will happen only in 10-100 thousand years.

The same data can be used in order to calculate the exact size of a star based on its rotation speed, periodic fluctuations in brightness, and some other parameters. Having carried out similar calculations, scientists have found that earlier the dimensions and distance to Betelgeuse were greatly overestimated.

In particular, the researchers estimated the radius of Betelgeuse at about 3.5 astronomical units. This is what scientists call the average distance between the Sun and the Earth. On the scale of the solar system, this is equivalent to the fact that the boundary of this star would not pass through the orbit of Jupiter, but through the main asteroid belt, which is located between Mars and Jupiter.

In addition, these estimates indicate that Betelgeuse could not initially be more than 19 times heavier than the Sun. This is also less than the previous maximum ratings.

According to the researchers, new estimates of the distance between the Earth and Betelgeuse do not mean that a supernova explosion will pose a threat to life on our planet. Scientists hope that this will help their future colleagues study one of the most high-energy events in the Universe from a close but safe distance in as much detail as possible.