Black holes are not surrounded by a burning fire ring 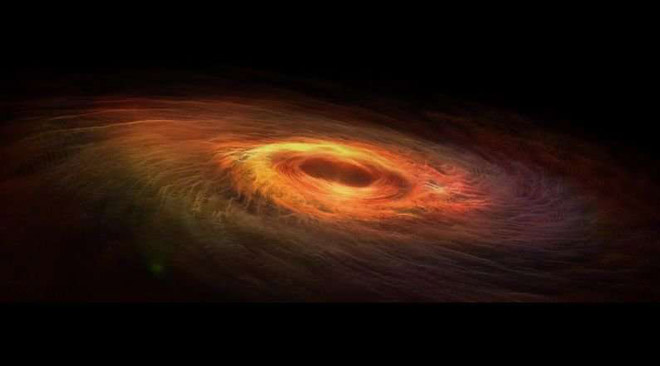 Some physicists believe that a fiery wall along the perimeter of a black hole will burn any object trapped in its powerful gravitational trap. But the team from the Ohio State University (USA) has a different opinion. Scientists have calculated what will happen if an electron falls into an ordinary black hole of mass equal to the Sun.

“The probability that an electron will collide with a radiation photon and burn will be negligible. And this is not taking into account the very large black holes that are known to exist in space, “says Professor of Physics Samir Mathur.

The new study is based on the previous work of 2004, in which Mathur expressed the theory that black holes are giant fluffy balls that heat up, sucking in new objects. This theory solved the famous “information paradox” of the black hole, described by Stephen Hawking in 1975. Hawking’s research concluded that particles that enter a black hole can never leave it. But this contradicted the laws of quantum mechanics, creating a paradox.

The assumption of a fiery wall arose in 2012, when four physicists from the University of California at Santa Barbara (USA) suggested that the “furry ball” would be surrounded by a ring of fire that would burn any object before it reached the surface of the ball.

“In a new study, we showed the shortcomings of the theory about the fiery wall,” said Mathur.

Black holes are places in space with such a huge gravitational pull that even fire can not get out of them. Their powerful capture condenses any substance that tightens black holes. They are invisible, but scientists have established that the size of black holes can vary from tiny to huge. Estimates of the sizes of black holes are based on observing the behavior of stars and gas that surround a black hole.

After months of mathematical calculations, Mathur and his team compiled a numerical basis for their theory, which refutes the fiery wall. It is based on string theory, the scientific notion that the universe consists of subatomic string-like energy tubes.

Mathur always considered himself to those scientists who are skeptical about the fiery wall.

“The question is where the black hole will capture you. We think that when a person approaches the horizon, the surface of the “fluffy ball” rises to meet him before he reaches the hottest part of the radiation field, and this main discovery of this new physical study refutes the assumption of a fiery wall, “says Matur .

“When a person falls into a black hole and becomes entangled in strings, it is not known what he feels.”

“The theory of a fiery wall seems to me a quick way to prove that something falling through the horizon is burning up. But we understand that there can not be such a rapid conclusion; To find out what will happen can only be done with the help of detailed calculations in string theory, “explains Mathur.