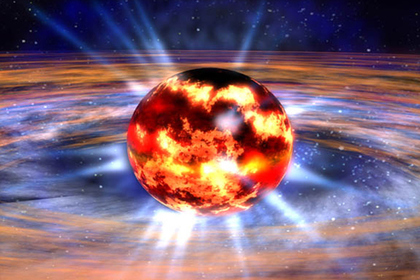 Scientists from the Center for Astrophysics and Space Science in San Diego came to the conclusion that tiny black holes can get inside the neutron stars and absorb their substance like parasites.

This process leads to the appearance of heavy chemical elements, for example, gold, platinum and uranium.

In the early stages of the evolution of the universe, space was filled with hydrogen and helium. Of these, the first stars began to form, in the interior of which more heavy chemical elements were synthesized, down to iron. Atoms with a large ordinal number can be formed only for catastrophic events, for example, supernovae or fusions of two neutron stars.

The researchers proposed a new mechanism for the formation of heavy elements involving small black holes. The latter are hypothetical objects that could emerge as a by-product of the Big Bang. They, in the opinion of scientists, can constitute a certain proportion of dark matter. If such a black hole gets inside the neutron star, then this will lead to the release of material rich in neutrons. This can explain the observed abundance of heavy elements in the universe.

Astrophysicists believe that their point of view is confirmed by the fact that in the centers of galaxies, where there should be many black holes, neutron stars are few. In addition, the process of devouring must be accompanied by emissions of radiation, which can be the cause of rapid radio bursts.