Black holes can be a giant “tangle of strings” 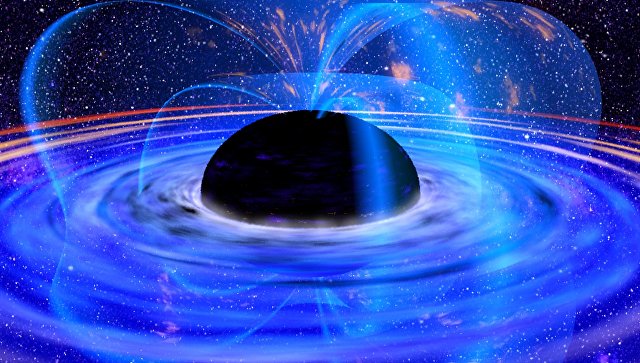 Black holes are surrounded not by a “wall of fire”, grinding and destroying all the matter falling on it, but a kind of tangle of objects whose behavior is described by string theory. This conclusion was made by physicists who published an article in the Journal of High Energy Physics.

The “wall of fire” theory postulated that it would burn before it reaches the event horizon, but our calculations show that this is not the case. What will happen at that moment , when the “astronaut” touches this tangle, can only be predicted with the help of string theory, “said Samir Mathur of Ohio State University in Columbus, USA.

For a long time, scientists believed that matter swallowed by a black hole could not leave it. The situation became much more complicated and contradictory in 1975, when the famous astrophysicist Stephen Hawking showed that black holes will gradually “evaporate” due to quantum effects in their event horizon, emitting energy in the form of Hawking radiation.

This became a big problem for theoreticians, since evaporation of black holes and the birth of such radiation implies that information about the quantum state of particles “eaten away” by a black hole will be irretrievably lost, which can not occur according to the laws of modern physics.

According to Mathur, this problem can be solved if we abandon the idea that all black holes are similar to each other as two drops of water or identical twins, which differ only in mass and in the diameter of the event horizon.

In 2003, together with the Russian physicist Oleg Lunin, he proposed to present a black hole not in the form of a dimensionless singularity point, but in the form of a kind of “fuzzball” that has a nonzero volume and shape. The horizon of events in this “coil” will not be an ideal sphere, as the classical theory of black holes asserts, but a “fluffy” ball, whose shape will constantly change as new particles are absorbed and evaporated in the form of Hawking radiation.

When other physicists tried to create a rigorous mathematical model of a black hole based on calculations by Matur and Lunin, they found out that its event horizon would not be a fluffy ball, but a spherical and invisible “wall of fire” – a cluster of high-energy quanta that would destroy any matter , falling on it. This brought back the problem of the information paradox, and also questioned either the theory of relativity, or quantum mechanics.

Mathur and his colleagues initially agreed with this assumption, but later they doubted this hypothesis, believing that some of the falling matter or even the entire “dinner” of the black hole would fly through this wall thanks to quantum effects.

They checked whether this was so, creating a computer model of a similar singularity, to which they “dumped” virtual copies of electrons that have roughly the same mass, charge, and other properties as their real counterparts.

As these calculations have shown, almost all the electrons will fly through the “wall of fire” without noticing it and not colliding with its high-energy photons. The more the virtual black hole mass was, and the closer it was to properties to real objects of this kind, the more pronounced this effect was.

“What happens when a particle or a person approaches the event horizon?” We assume that the “tangle”, figuratively speaking, grows in their direction and absorbs them before they reach the hottest zone where Hawking’s radiation is born. This completely refutes the theory “walls of fire,” concludes Mathur.