Black holes can be quantum stars 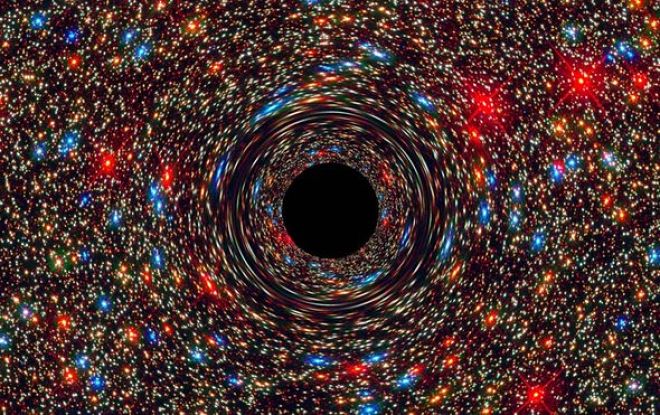 When giant stars die, they do not just disappear. They collapse, leaving behind a compressed stellar residue, usually the size of a metropolis, which is a superdense neutron ball, called a neutron star.

Most theorists believe that in exceptional cases a giant dying star forms a black hole – a pointlike “singularity” with virtually infinite density and a gravitational field so powerful that there is not even light, the fastest thing in the universe.

A new study suggests an alternative idea that halfway between neutron stars and black holes can exist such hypothetical objects as black stars or gravelcasters. If this is so, the exotic star corpses should be almost identical to the black holes, except for one key circumstance – they do not absorb irrevocably light.

There are good reasons to look for such alternatives, because black holes raise many theoretical problems. For example, their singularities are supposedly hidden by invisible boundaries, known as horizons of events. Throw something into the black hole, and as soon as it passes the horizon of events, it will disappear forever. But there are laws of physics that suggest that information can not be destroyed, including information encoded inside everything that falls into black holes.

Developed over the past two decades, the model of black stars and gravelstars suggest that these objects will not have singularities and event horizons. But it is still unclear whether such objects can really form and remain stable.

New research by the theoretical physicist Raul Carballo-Rubio from the International School of Advanced Studies in Italy suggests a mechanism that allows the existence of black stars and grabbers.

The scientist investigated an unusual phenomenon, known as quantum vacuum polarization. Quantum physics, which gives a better description of how all known subatomic particles behave, suggests that reality is uncertain, limiting how accurately one can know the properties of the most basic units of matter-for example, one can never absolutely accurately know the position and momentum of a particle in one and the other same time. One strange consequence of this uncertainty is that the vacuum is never completely empty, but has so-called “virtual particles” that continuously oscillate, enter and exit from existence.

In the presence of a huge amount of energy released during the explosion of a huge star, these virtual particles can be polarized or ordered depending on their properties, just as the magnets have north and south poles. Carballo-Rubio calculated that the polarization of these particles can create an amazing effect inside the powerful gravitational fields of dying giant stars – a field that repels, rather than attracts.

According to Einstein’s general theory of relativity, the material and energy curvature of space-time leads to the formation of gravitational fields. Planets and stars have a positive amount of energy, and the obtained gravitational fields are attractive by their nature.

“However, when virtual particles are polarized, the vacuum they occupy can on average have negative energy, and they warp space-time in such a way that the associated gravitational field becomes repulsive,” says Carballo-Rubio.

This, of course, could prevent the formation of a black hole. This phenomenon causes relatively light stellar remnants to form neutron stars instead of black holes. Their gravitational fields are not strong enough to destroy neutrons in a singularity.

The two previous models assumed that repulsive gravity could lead to the destruction of stellar remnants with the formation of black holes. One of the simulated stellar remains instead of them formed gravastars – objects filled with a quantum vacuum covered with a thin shell of matter. Another model assumed that the result of these collapses were black stars, where matter and quantum vacuum alternated throughout the structure in a careful balance. Both objects still have powerful gravitational fields that deeply deform light, so they look dark, like black holes.

According to Carballo-Rubio, there was a great deal of uncertainty about the properties of black stars and grabbers before. In his new work, he created a mathematical structure that includes the effects of repulsive gravity in equations describing the expansion and contraction of stars. Previously it was believed that this can only be interpreted with the help of computers. His new model assumes the existence of a hybrid of a black star and a gravastar, an object where matter and quantum vacuum propagate throughout the structure, but with matter at higher concentrations in the shell than in the core.

The study is published in the journal Physical Review Letters.