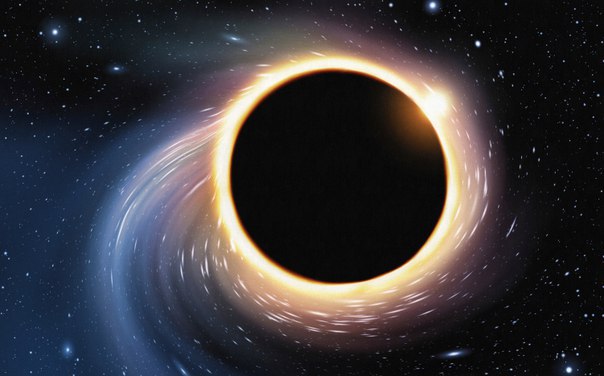 Exploring space, studying the nature of black holes, said about the new opening. Theoretical calculations showed that the information absorbed by the object is reflected from the edge of a black hole, like a ball bounces off a wall or a beam of light from a mirror.

A new sensational statement was made by Nobel laureate Gerard ‘t Hooft (Gerard ‘t Hooft). His work was a response to the recent statement by Stephen Hawking that he solved the problem of the information paradox, which occupied the minds of astrophysicists for the last 40 years.

The paradox is this: if any object falls into a black hole, it stays there, and being outside we will never be able to know any of its characteristics — information about him to the outside observer disappears behind the event horizon.

In 1974, Hawking in their works showed that the quantum laws of nature force near the event horizon of a black hole, make the object emit radiation in the form of photons. This radiation, called the Hawking radiation makes the black hole to slowly lose mass and effectively “evaporate.”
In the end, she disappears, destroying everything that she swallowed (including information about overextended inside the objects). But according to the principles of quantum mechanics, information cannot be created or destroyed, which means that it needs to go somewhere. But where?

Gerard ‘t Hooft says: “the Solution lies in the fact that the substance absorbed by the black hole, affect the outgoing Hawking radiation. At first, Hawking didn’t believe it, but gradually he began to reconsider his point of view.”

Hawking now believes that if, for example, the elephant crosses the event horizon of a black hole, the information about his belonging to the elephants remains on the edge of a black hole as a kind of holographic imprint. When Hawking radiation emanates from the hole, it makes this print for yourself.

This explanation excited the minds of scientists around the world, forced to participate in the discussions — including ‘t Hooft. Researchers have tried to understand how falling into the black hole objects create these prints and how the prints affect the outgoing radiation.

Gerard ‘t Hooft conducted their own calculations and offered an explanation. The idea of the Dutch physics is that gravity is responsible for both questions. Continuing to discuss the example of falling into the black hole of the elephant, we find that when moving them the boundaries of the event horizon its gravitational field changes. When the outgoing Hawking radiation passes through this field, his way transformered, and it gets possible to transfer information about the missing in the bowels of the poor elephant.

Information about it, such as its mass, for example, then is reflected into space, while the animal itself carries much less. We are thus talking only about the information that the particles are transferred, says ‘t Hooft in their work.

Article ‘t Hofft yet appeared only on the website of preprints arXiv.org and has not passed peer review by colleagues who all know how reasonable the calculations and conclusions of the Nobel laureate.

However, some comments professionals results in New Scientist. So, decisions and ‘t Hooft, and Hawking have one serious drawback — the overabundance of information. In fact, their explanation suggests that information near the event horizon is duplicated, that is created instead of destroyed.
Simply put, if the long-suffering elephant is sent into the bowels of the black hole, then all of its characteristics “dive” down there with him. But in this case the same information is “hung” on the edge (when Hawking), or reflected back into space (if the rights ‘t Hooft).

“Quantum mechanics forbids this kind of doubling,” notes Steven Giddings (Steven Giddings of the University of California, Santa Barbara. — Also not clear how the transfer of gravitational information consistent with the principles of quantum mechanics. Meanwhile, these details are very important.”