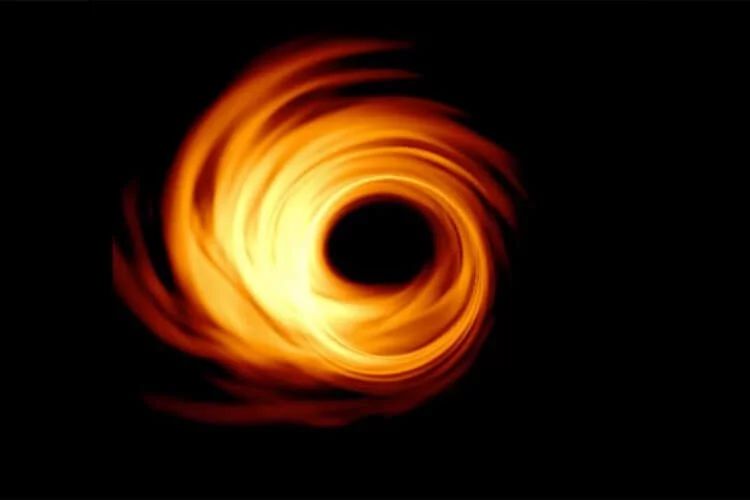 Black holes capture all that they face. From subatomic particles to stars, solids, gases, liquids, and even light — everything that falls in them disappears. And in the same way, black holes capture the popular imagination. Reflections on space since people first saw the dots of light adorning the night sky make the mind imagine things that are impossible to see here on Earth. And black holes expand the imagination more than any other miracle of astronomy.

A black hole is a space vacuum cleaner sucking star dust into the most bottomless abyss, bending space-time, causing an irresistible gravitational pull, non-existence, which can wipe everything off the earth.

This is a hole in space. Black – because the light can not avoid its attraction. And therefore invisible. Unimaginable

And yet, black holes tried to imagine – even before they found out that they actually exist. In 1784, an English geologist and clergyman (and amateur astronomer), John Michell, suggested that for a large and dense enough star, Newtonian gravity would be too strong for light to leave. He believed (like Newton) that light is a stream of particles (then many thought so). Michelle calculated that the speed of light particles would be insufficient to avoid a star’s gravity as dense as the sun, but 500 times its diameter. “The light of such cannot come to us,” he wrote.

About ten years later, the French mathematician Pierre-Simon Laplace also suggested that there could be “invisible bodies” in space. Laplace imagined a star with a density of the Earth and 250 times wider than the sun. Its Newtonian gravitational attraction would not allow the light to leave the surface. “Thus, the largest bodies in the universe may be invisible because of their size,” he said.

True black holes do not arise from Newtonian gravity, but from Einstein’s theory of gravity, the general theory of relativity. Einstein hid black holes (even from himself) in his equations. But the German astronomer Karl Schwarzschild used this concept during the First World War, shortly before his death after an illness on the Russian front. Schwarzschild, however, could not imagine that a star could shrink to such an extent that it would exceed the density necessary to make it invisible. This feat of imagination was realized by Robert Oppenheimer and Heartland Snyder in 1939 (in the same year when Einstein published a paper in which he denied the possibility of the existence of black holes). Oppenheimer and Snyder calculated that a fairly massive star could collapse under its own gravity. “This will close the star from any connection with the remote observer; only the gravitational field will remain, ”they wrote.

Soon, Oppenheimer took up the Manhattan atomic bomb project, and no one paid much attention to his collapsing stars until the 1960s. In December 1963, they were discussed at a symposium in Dallas, and a few weeks later at a meeting in Cleveland. Someone even uttered the phrase “black hole” to refer to them.

But this title was not popular until John Archibald Wheeler spoke it in a speech in 1967. Then began a serious scientific study of black holes. Stephen Hawking studied them, showing that they could emit a weak form of radiation, which was named after him. Astronomers have been looking for black holes, collecting impressive evidence that they really exist, based on the movement of stars and other substances in the vicinity of black holes. (In fact, Michelle suggested this approach to detect the presence of an invisible star). In 2016, gravitational waves provided precise evidence of the collision of two black holes.

Now almost no one doubts that they exist. But although Michell, Oppenheimer, Wheeler, Hawking and many others imagined what a black hole should be, none of them had ever seen it.

And so, literally in April, the Event Horizon Telescope collaboration presented an image: the darkness of a black hole surrounded by light in its surroundings. This image confirms what was already known: that black holes are not just a figment of imagination, it is a truth originally presented by minds imbued with a kind of scientific spirit, faith in the ability to discover cosmic phenomena, without being in space.

The history of science remembers other instances of imaginary phenomena that challenge the imagination even before its discovery. Paul Dirac imagined antimatter even before it was found in nature. Alexander Friedman imagined the expansion of the Universe before astronomical observations confirmed this. The ancient Greek philosophers represented atoms for 2500 years before microscopy was complicated enough to photograph them. All these successful fantasies were regarded by some as an insult to common sense or ordinary logic. Their confirmation, as with the new image of the black hole, confirms the lesson that the apparent absurdity is not a convincing argument against the existence of the phenomenon.

Perhaps the fact that the human imagination has come to the existence of black holes, despite their absurdity, is one of the reasons why black holes fascinate anyone who thinks about them. The black hole became evidence of the existence of incredibly incomprehensible astronomical phenomena.