Bodies in the solar system lie not in one, but in two planes 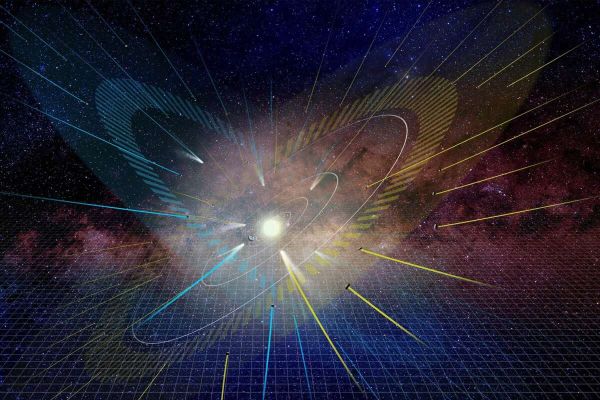 The study of the motion of comets indicates that the orbits of the bodies of the Solar System are grouped not in one, but in two main planes. Analysis of the orbits of long-period comets shows that the aphelions of the comets’ orbits – the points of greatest distance from the Sun – lie either in the well-known plane of the ecliptic, where the orbits of all the planets of the system lie, or in the newly discovered “empty ecliptic”. These findings play an important role in modeling the origin of comets in the solar system.

In the solar system, planets and most other bodies move in roughly the same orbital plane, known as the ecliptic, but astronomers are aware of exceptions such as comets. Comets, and especially long-period comets – which make one revolution around our star for 10,000 years or more – often move at an angle to the plane of the ecliptic in different directions.

Models of the formation of the solar system show that even long-period comets were initially formed near the plane of the ecliptic, and then were pushed into the orbits in which they are currently, as a result of gravitational interactions, of which the interaction with gas giants plays the greatest role. However, even with such scattering of comets, their orbits should lie in the vicinity of the ecliptic. To explain the observed spread in the directions of the comets’ orbits, it is necessary to take into account another, external factor.

The solar system is not isolated in space; it has a small but significant effect on the gravitational field of our Milky Way galaxy, of which it is part. In the new work, a team led by Arika Higuchi, assistant professor at the University of Occupational Health and the Environment, Japan, studied the effects of galactic gravity on the orbits of long-period comets by analytically examining the equations describing orbital motion.

As a result of the work carried out, Higuchi’s team showed that, taking into account the influence of the gravity of the Milky Way, all the orbits of the bodies of the solar system lie not in one, but in two main planes. The first of these planes is the well-known ecliptic, located at an angle of about 60 degrees to the plane of the Milky Way disk, and in it the orbits of all bodies of our planetary system initially lie. However, there is one more plane of stabilization of the orbits of objects of our planetary system – the so-called “empty ecliptic”, also located at an angle of 60 degrees to the plane of the Milky Way, but tilted in the direction opposite to the ecliptic. The name “empty ecliptic” is associated with the fact that initially this plane is empty and only in the process of evolution of the system is it filled with comets scattered from their original orbits, the authors explained.

The research is published in the Astronomical Journal.