“Cassini” captured giant hurricanes on the surface of Saturn 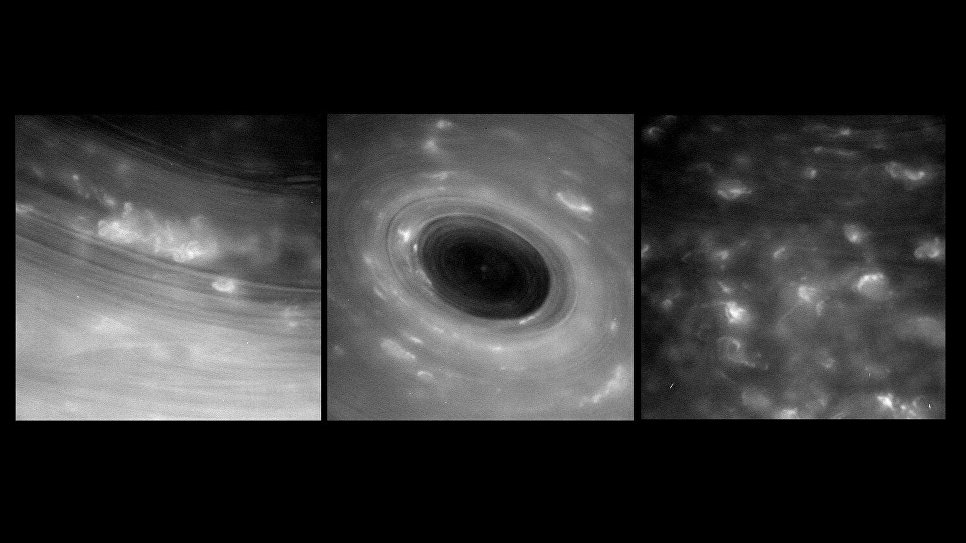 The Cassini probe successfully completed the first flight through the emptiness between the rings of Saturn and the giant planet and received the most detailed photographs and video recordings of hurricanes in the upper layers of its atmosphere, NASA reports.

“No other probe was so close to Saturn that we could only guess based on the theory and predictions obtained from our flights through the rings of Saturn, what exactly we will be waiting for in the gap between the rings and the planet.” I’m glad to inform everyone that Cassini Successfully flew through this “hole” and stayed in great shape, “said Earl Maize, the head of the Cassini mission to NASA.

Last Saturday, “Cassini” officially began the last phase of his life, the last time he met with Titan. The rapprochement with this moon of Saturn helped the probe to change the flight trajectory and enter the collision course with the giant planet, in the atmosphere of which it would burn in mid-September of this year, having completed 22 flights through the gap between the rings and their “master.”

Yesterday evening, “Cassini” made the first such “pirouette”, as close to Saturn and getting a lot of new scientific data on the structure of the bowels and atmosphere of the giant planet. For additional protection of the probe, NASA deployed the main antenna of the Cassini in such a way that it became a kind of “shield” that protected the spacecraft from the impacts of dust and micro-asteroid.

As noted in NASA, the probe actually touched the upper layer of the clouds of Saturn, flying only 3000 kilometers from their surface, and on the way back very closely approached the inner boundary of its rings, getting close to them for 300 kilometers. The very gap between the rings and the atmosphere of Saturn is only 1,5 thousand kilometers, which means that the “Cassini” actually entered the atmosphere of Saturn during this span. According to NASA scientists, the probe flew through those regions where the density and pressure of the Saturnian “air” were equal to the terrestrial one.

The “nail” of the scientific program was super-detailed photographs of Saturn’s hurricanes, taken at the moment of closest rapprochement with the planet. These images and other data, as the scientists hope, will help us understand how the atmosphere of the giant planet works and will help to disclose the mystery of the birth of the rings.