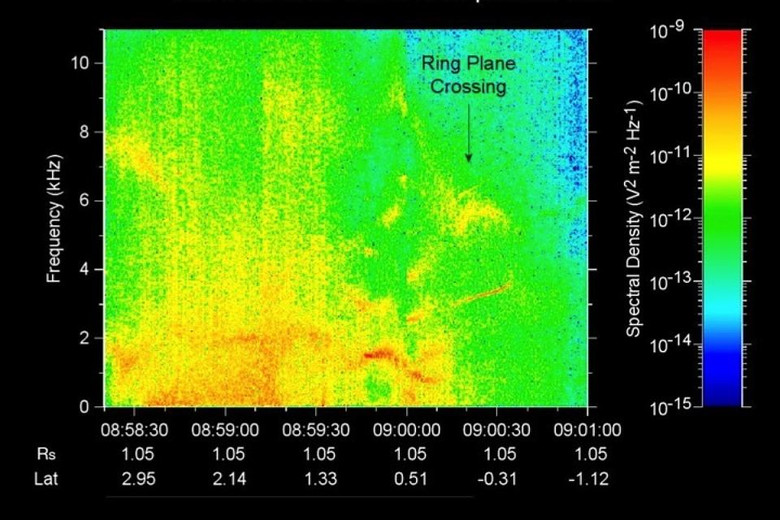 The station “Cassini” flying April 26, 2017 over the surface of the gas giant recorded strange sounds. The first sounds could be caught back in April 2002, when the station “Cassini” was in 374 million kilometers from Saturn. The signals were modulated in frequency in the range from 50 to 500 kHz, they were transmitted in series and in different key.

The most notable record was made on July 25, 2004 already in the immediate vicinity of the rings of Saturn. NASA specialists have transferred it to the frequency range, distinguishable for the human ear. But they did not disclose it at once, but for some reason a few years later.

Enthusiasts still moved – a few octaves – the tone of the recorded sounds. And suddenly they became like someone’s speech. As if some inhuman voice was being broadcast. If desired, you could even make out the individual words uttered, as the enthusiasts supposed, by an alien who flew here in his ship.

Mysterious radio signals were captured and recorded using the same RPWS equipment. Of course, NASA did not consider them reasonable. It was assumed that the electromagnetic oscillations were most likely generated by outbreaks of the northern lights of Saturn. Or by meteors that crash into the ice rings of a giant planet and introduce perturbations into electromagnetic fields. But then there was evidence that the source of the sounds was somewhere about Saturn, which again fueled suspicions in the activities of aliens.

According to the plan of the so-called Grand Finale, the station “Cassini” should fall on Saturn on September 15, 2017, and before that – 22 times fly over its clouds, diving into a 2000 km gap under the rings. Each “dive” will bring new knowledge about the electromagnetic background of the planet and, perhaps, new sounds. The first time the station flew under the rings on April 26, the second time – on May 2.