Cassini recorded the changes in the hexagon of Saturn 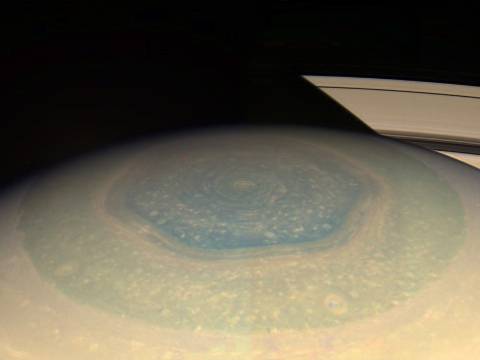 NASA has shown some change in the appearance of the Northern pole of the planet in the period between 2012 and 2016.

The owner of the famous system of rings and satellites”shepherds” is considered to be one of the most unique planets of our system. This gas giant since 2004, is under the supervision of the automatic interplanetary station “Cassini”, through which we learn about the sixth planet from the Sun.

That at the North pole of Saturn is raging largest anticyclone in the Solar system, having the form of hexagon, has long been known. The us space Agency unveiled two combined images of the region obtained by the spacecraft Cassini in 2012 and 2016 they are seen as four years, giant hexagon has changed in color.

The reason changing face of the North pole of Saturn remains a mystery. According to one version, it can be connected with the change of seasons on the gas giant.

“Color transition from blue to gold can be a consequence of the emergence of photochemical fog in the atmosphere of Saturn, which indicate the arrival of summer in the Northern hemisphere,” – noted in NASA.

According to researchers, the boundaries of the hexagon, which is a hexagonal vortex, can play the role of a barrier impermeable to the substance inside of the middle latitudes of the planet. In seven years the atmosphere of the pole was purified from aerosols and no longer scatters light. But after the vernal equinox occurred in August 2009, the light again illuminates the polar region of the gas giant. It triggers photochemical reactions, and aerosols back to the atmosphere.

Another reason entailing changes in the “hexagon” of Saturn, can be wind, strength and direction of which could also change due to warming.