“Cassini” saw a lot of “propellers” in the rings of Saturn 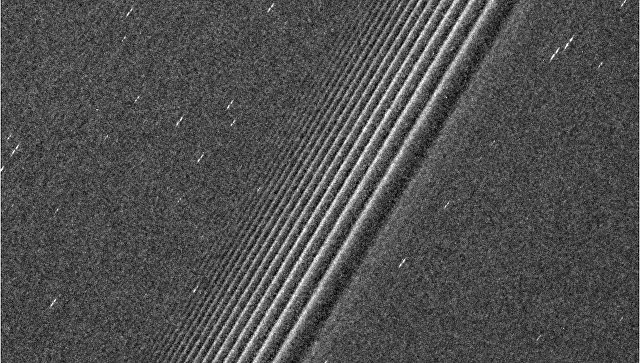 The Cassini probe received the most detailed photographs of Saturn’s near rings and saw in them a lot of “propellers” – bright vortices and waves, according to the NASA Jet Propulsion Laboratory.

The rings of Saturn, as scientists believe today, arose as a result of the destruction of the “embryo” of the planet in the early days of the existence of the solar system. He came too close to the giant planet, was torn apart by tidal forces and fragmented into many small fragments, the densest of which were “eaten” by Saturn and Titan, and the rest formed the material of future rings.

On the new images received by Cassini during the last “dive” in the rings of Saturn, you can see the original “folds”, “straws” and “propellers” walking along the surface of ring A, the gas-dust disk nearest to the planet, and its neighbors. Scientists started talking about these structures in 2004 when Cassini entered Saturn’s orbit, but their first photographs were received only in the winter of this year, when the probe began to fly through the rings.

As the scientists say, new photos allow us to draw a line between the large “propellers” that Cassini saw at the beginning of its mission and which are associated with the existence of moons inside the gas-dust rings of Saturn, and small structures of this kind found recently. Their study will help to understand how these moons originated, when they were born and how long they live.

Recently, “Cassini” officially began the final phase of his life, the last time he met with Titan on April 22 this year. The rapprochement with this satellite of Saturn helped the probe to change the flight trajectory and enter the course of collision with the planet, in the atmosphere of which it will burn in mid-September of this year.

During this time, “Cassini” will make 22 flights through the gap between the rings and their “master”. Two weeks ago, he performed the first such pirouette, as close as possible to Saturn and received a lot of new scientific data on the structure of the bowels and atmosphere of the giant planet. For additional protection of the probe, NASA deployed the main antenna of the Cassini in such a way that it became a kind of screen and protected the spacecraft from the impacts of dust and micro-asteroids.