“Cassini” went into the trajectory of a collision with Saturn 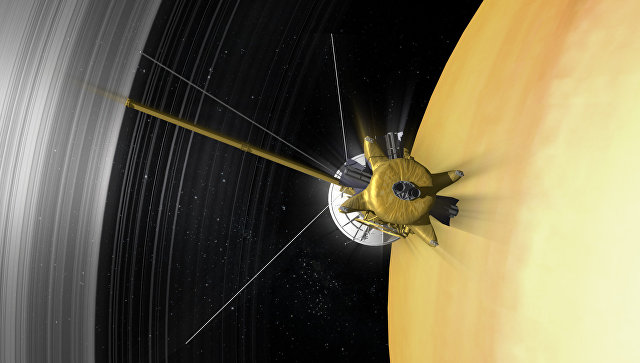 Yesterday night, the Cassini probe approached Titan, completed the last gravitational maneuver, and advanced to a direct trajectory of a collision with Saturn, in the atmosphere of which it will burn on Friday, NASA reports.

“It can be said that Cassini maintained a very long relationship with this moon of Saturn, meeting her about once a month for more than 10 years.” Their last rendezvous causes mixed feelings, but despite this parting, the true Titan is the last time will help the probe to enter a new orbit, “says Earl Maize, the head of the Cassini mission to NASA.

The life of “Cassini” will break off very soon – last week he launched the last, 22 rounds around Saturn within the last phase of the mission, named “The Final of the Opera.” In five days, September 15 this year, the NASA probe will enter the dense layers of the atmosphere of Saturn and burn, while transmitting information about the structure of its bowels to Earth.

After receiving the last photographs of Saturn’s rings, “Cassini” last night approached Titan, whose attraction will change the flight path of the probe and send it to the last rendezvous with the “lord of the rings”. NASA experts called this gravitational maneuver a “farewell kiss”, since after him the fate of “Cassini” will not change anything.

As NASA notes, the probe flew at a distance of about 119 kilometers above the surface of Titan, receiving farewell pictures and collecting the latest data on the device of its atmosphere and surface. This information, as well as the remains of other scientific data will be transmitted to Earth in the near future and the memory of “Cassini” will be cleared before he begins his last “dive” in the atmosphere of Saturn.

Tomorrow, some Cassini instruments will start working in such a way that the information they collect will be transmitted to the Earth in real time, which will allow the probe to conduct scientific observations virtually until the moment of its death. As scientists expect, this sad event will happen next Friday, at about 3 pm Moscow time.