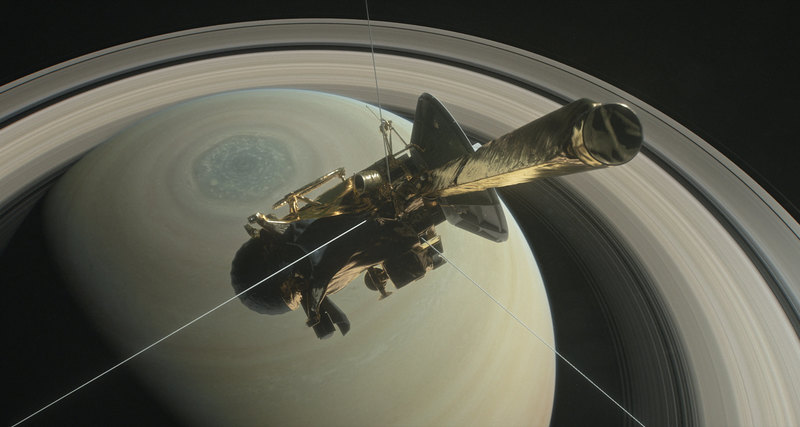 The mission of the Cassini research apparatus is coming to an end. But before he burns in the atmosphere, he has to spend five more spans in record closeness to the cloudy front of the planet.

On August 14, the Cassini space research vehicle will begin the last five of the Grand Finale – a series of spans in the immediate vicinity of the planet, after which it will burn in its atmosphere. For 20 years of his mission, the space explorer has collected and transmitted to Earth a huge amount of data on the gas giant, as well as the rings and moons surrounding it. In his last journey, he will have to travel at a distance of only 1630 and 1710 km above the clouds of Saturn – so close to this planet has not flown yet no scientific probe.

At these altitudes, the atmosphere will be so dense that Cassini will have to use engines to maintain stability. Depending on the atmospheric phenomena, NASA engineers can slightly change the trajectory of the probe’s flight, moving it to the sides or raising it to a high altitude.

As before, the main interest of astronomers lies in the study of the famous hexagonal storm at the North Pole of Saturn, as well as the polar lights – but this time the survey will be conducted from an unprecedented close angle. According to NASA’s official press release, Cassini will be the first atmospheric probe of Saturn, which will lay the groundwork for sending a number of planetary research vehicles.

Despite the fact that every day the brave space wanderer comes closer to its end, he has to conduct many more important operations. Be that as it may, sooner or later we will have to say goodbye to the ship, which for two decades has regularly supplied humanity with information about one of the most interesting planets in the solar system.