Ceres was a planet of eternal “ice volcanoes” 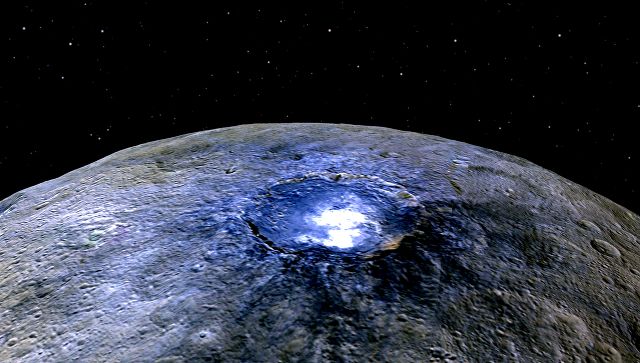 Ice volcanoes were almost continuously arising on the surface of Ceres, the largest dwarf planet, since its birth. This conclusion was reached by NASA scientists who published an article in the journal Nature Astronomy.

“We showed that cryovolcanoes had to appear on the surface of Ceres every 50 million years, on the one hand, traces of their existence were always present on the surface of the planet, and on the other – they clearly played a lesser role in shaping its appearance than the real volcanoes of the Earth , Venus, Mars and other stony planets, “the scientists write.

The first photographs of Ceres, received by the Dawn probe in March 2015 after its arrival to the dwarf planet, revealed two unusual structures that nobody expected to see: the mysterious white spots in the Okatoria crater, which were traces of a thick brine, and the unusual pyramidal mount Ahuna, over Ceres at four kilometers.

Both of them led the scientists to reconsider theories describing the formation of Ceres and other such failed “embryos” of the planets. Only a year after the opening of these structures, Christopher Russell, the head of the mission, and his colleagues said that both are a product of cryovolcanism – eruptions of relatively warm water and a dense “pickle” from the bowels of a dwarf planet to its surface.

The discovery of this mountain made scientists wonder whether it is a unique form of relief for Ceres, generated by a single impact of a meteorite and the melting of its rocks, or similar “pyramids” could already grow many times on the surface of a dwarf planet in the past, and then disappear.

To answer this question, the scientists analyzed a giant archive of images collected by the Dawn probe over the past two years and tried to find traces of dome structures similar to Ahun and other known “space” cryovolcanoes on other planets and moons of the solar system.

In the search for such objects, they relied on the fact that, unlike the Earth and other stony planets, the depths of Ceres mainly consist of ice. At very low temperatures, ice becomes almost as strong as “real” rocks, but it maintains high fluidity.

This is manifested in the fact that over time, a mountain composed of ice will “spread” over the surrounding plain, covering it with an even layer of frozen water. This process, scientists suggested, could make all traces of ancient cryovolcanoes almost invisible.

In total, Russell and his colleagues managed to find 32 similar domed structures with a height of about a kilometer or more, hardly formed as a result of the fall of asteroids or some other “nevulcanic” processes.

Having selected two dozen of the most interesting objects, NASA geologists measured from height, volume and other parameters and attempted to reconstruct their original appearance using computer models of “spreading” ice, as well as to calculate their lifetime and the time of their appearance on the surface of Ceres.

As these calculations have shown, cryovolcanoes almost continuously appeared and existed at Ceres for at least the last billion years, and most likely appeared on its surface and in more ancient epochs.

What exactly generated them is not yet clear, but the absence of volcanoes in the circumpolar regions of Ceres, where the temperatures are extremely low, speaks of their “internal” origin and the absence of a visible connection with the fall of large asteroids. As scientists hope, new images from Dawn and further exploration of the geology of Ceres will answer this riddle.