Scientists from the Harvard-Smithsonian Center for Astrophysics have studied one of the closest star clusters to the Earth and identified the properties of its individual representatives.

Stars often form in rather crowded regions of space. Combining the resources of such multi-wave missions as “Chandra” and “Spitzer”, astronomers received more accurate and complete data on the contents of clusters, and also determined the individual properties of their populations. One example of such data is the formation of discs around the new stars (most likely, protoplanetary ones). Discs are formed along with new stars, and then develop for several million years before they are scattered, presumably, leaving behind the planets. Under the conditions of clusters, their interaction can be affected by interaction with neighbors. The study is published in The Astronomical Journal.

Star discs are warmed up by their stars. They were first detected by means of infrared radiation from warm dust. The more developed young stars without discs lack this characteristic infrared signature, which means that they can be considered more developed representatives of the cluster. Also, astronomers have found out that young stars are a source of increased levels of X-ray radiation compared to stars of the main sequence due to still developing internal circulation.

In the conditions of overcrowded clusters, other factors were discovered, besides age, which could influence the formation of stellar disks. X-ray radiation helps when registering young stars that do not have any disk formations. 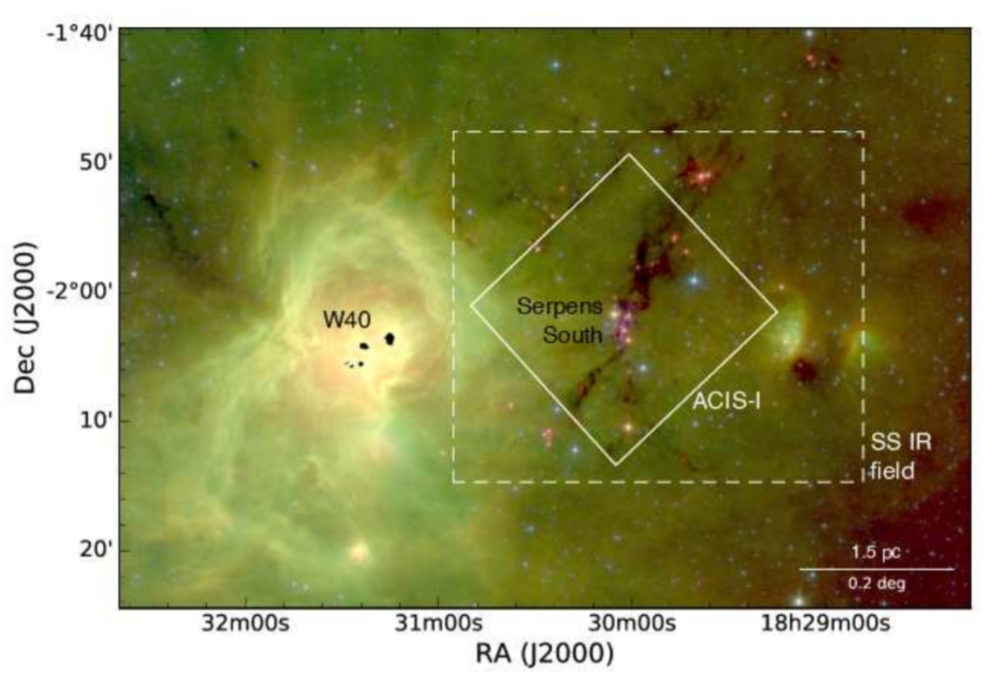 The Serpens South star cluster, located about 900 light-years from Earth in the direction of the constellation Snake, is very young, its stars are hidden under thick dust. It is believed that this is one of the youngest regions near us, which makes it an important testing ground for studying the evolution of disks in clusters.

Astronomers from Harvard-Smithsonian Center for Astrophysics Elaine Winston and Scott Walk used data from Chandra and Spitzer to analyze 66 young cluster stars in infrared and X-ray spectra. They found five stars that did not have discs, which, apparently, were already middle-aged, since they did not have a signature. But X-ray radiation has shown that they are still quite young: scattering of their disks is the result of not clustering, but cluster interactions, which corresponds to the theory.

The team also resolved a long-standing dispute about the distance to the cluster. Many astronomers assumed that it was located as much as three thousand light-years from us – about the same distance as another cluster in the same region of the sky. It is known that the fine X-ray emission of young stars in clusters follows a narrow distribution of values, and the observed X-ray emission from these stars refutes the assumption of a large distance and inclines the scales in favor of 900 light years.