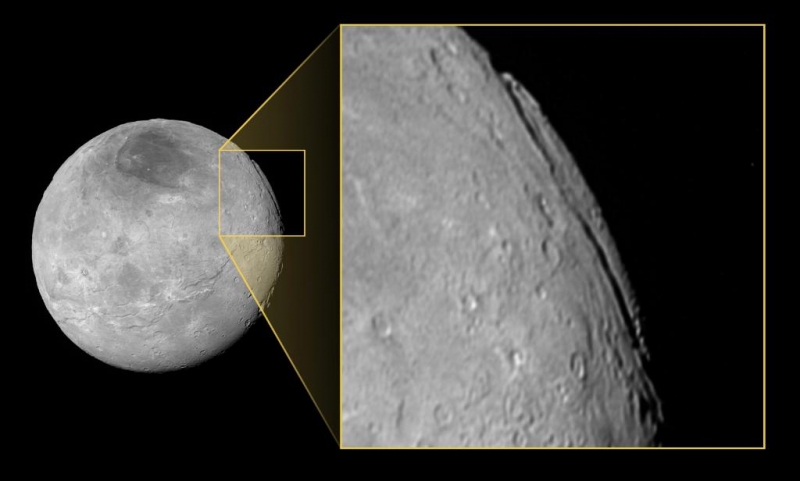 Charon, the largest satellite of Pluto, discovered a giant canyon, which is most likely the deepest (known) in the Solar system.

It is much deeper and longer than the largest such geological formation on Earth — the Grand canyon in the United States. It is reported by NASA.

The length of the canyon is 700 kilometers (the length of the Grand canyon is 450 km and to a depth of nine kilometres (five times more structures on the Land). The size of a rocky cliff on the Charon is comparable with those on the largest moon of Uranus — Miranda, where it reaches five kilometers.

On the picture provided by NASA shows a portion of the geological formation with a length of 300 kilometers. Image obtained on July 14, 2015 science instrument LORRI (Long Range Reconnaissance Imager) of New Horizons from a distance of 466 thousand kilometers from Charon.

Camera New Horizons July 14, 2015 was at a closest distance from Pluto and its moons. In 2019, the plant will reach the planetoid 2014 MU69 located at a distance of 1.6 billion kilometers from the planet in the Kuiper belt.

The main objective of New Horizons is to study Pluto and its satellite Charon. Scientific equipment installed at the station designed to collect data on the presence of the magnetosphere, the dwarf planet, the composition of its atmosphere, surface structure and interaction with Charon.