Charon protects the atmosphere of Pluto 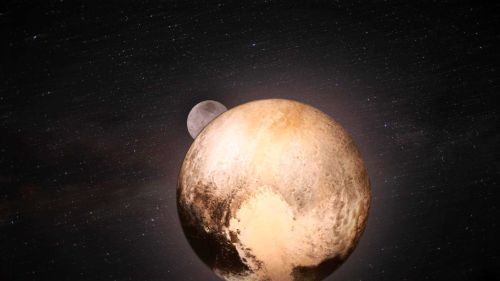 American scientists came to the conclusion that Charon is able to protect the atmosphere of Pluto from the effects of the solar wind.

Traces of the existence of Pluto’s atmosphere was discovered in 1985. Subsequent work has shown that the gas shell of the planetoid layered, cold and volatile substances such as methane and nitrogen. The theoretical calculations indicate that it has no strong magnetic field, which would help to protect the shell from blowing away by the solar wind.

In the new work, scientists from Georgia Institute of Technology have built a computer model that shows how the presence of Charon affect the movement of the stream of particles coming from the Sun. According to the model, the satellite planetoid capable of changing the direction of the solar wind, preventing the collision of highly ionized particles with the gas molecules in the atmosphere of Pluto.

The strongest effect is when Charon is between Pluto and the Sun, and the crucial role played by the temporary atmosphere of the satellite. In the interaction with the solar wind part of it is ionized, creating the ionosphere. This creates an obstacle for flying to Pluto the particles, since the atmosphere has a high conductivity and an area larger than Charon.

According to the authors, thanks to the “shield” Pluto managed to maintain a significant portion of volatile elements in the atmosphere. However, the planetoid continues to lose gas cover. Knowing the speed with which blown away by its atmosphere, scientists hope to find out what it was in the early stages of the existence of Pluto, and what was the Solar system in the process of its formation.