Chicsulub asteroid hit the “weak spot” of our planet 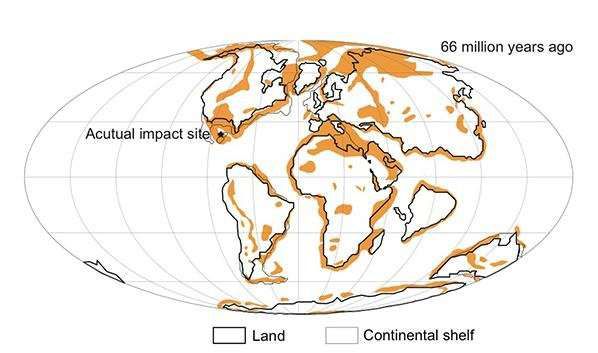 A pair of researchers from Tohoku University, Japan, found evidence indicating that if an asteroid that hit the surface of our planet 66 million years ago and formed Chicxulub crater landed elsewhere on the Earth’s surface, the consequences of its fall are not would be so destructive. In their new work, Kunio Kaiho and Naga Oshima find that the fall of the asteroid in some other part of the planet would have left a chance to survive the dinosaurs.

Scientists around the world came to a single point of view about the cause of extinction of dinosaurs – this event is associated with the fall of a large asteroid off the coast of the land that is now known as the Yucatan peninsula. The fall of this asteroid has raised so much soot and other material into the air that the temperature on the planet has become too low (about three years) for the existence of dinosaurs and other terrestrial animals. But now it seems that dinosaurs could survive if the asteroid hit almost any other point on the surface of the planet.

In their work, Kayho and Oshima, using computer simulations, show that the amount of soot lifted into the air when an asteroid falls to the Earth’s surface is mainly determined by the content of “hydrocarbons” (the authors of the article include oil, coal, and oil rocky rocks) in that part of the crust of our planet, where the cosmic stone falls. Researchers have determined that at the site of the fall of the asteroid that formed the Chixulub crater, the distribution density of the “hydrocarbons” is particularly high (87% of the Earth’s surface area has a lower distribution density of hydrocarbons). If an asteroid hit almost any other point on the surface of the globe (except for the brown zone in the photo), much less soot would have risen in the air, and dinosaurs would have a real chance to survive, the authors believe.