In December, China will attempt the first ever soft landing of a spacecraft on the far side of the moon. The official start dates of the mission have not yet been announced, but according to the latest rumors, the launch will take place on December 8, and landing on the satellite – at the end of the month, according to the IEEE Spectrum magazine. According to the mission team, the ability to accurately land at a specific point in the satellite, as well as autonomous scientific work, can lay the foundation for future deep-space research programs, as well as provide scientists with experience that will be useful in future missions to study the lunar poles early 2020s.

At the same time, the first landing of the spacecraft on the back side of the satellite promises to be a harsh test of new communication and navigation technologies, as well as landing technologies.

The Chang’e-4 apparatus, consisting of a stationary lunar station and a lunar rover, which will land on the back of the moon, was originally developed as a backup for the Chang’e-3, the first Chinese apparatus that landed on the lunar surface in 2013. But after the device successfully landed in a place called the Sea of ​​Rains, the scientists decided to use Chang’e-4 as part of a separate mission, the purpose of which is to study the far side of the moon.

Interestingly, the moonwalker Yuytu, which Chang’e-3 landed on the surface in 2013, was able to move only 114 meters after two lunar days from the moment of landing (according to earthly standards for about a month), after which it failed. Lee Ming, vice president of the Chinese Academy of Space Technology at a meeting of the International Astronautical Congress, held in October this year in Germany, said without technical details that the main reason for the breakdown was “small machine components”. The new 140-kilogram lunkhod Chang’e-4, Min added, should be more reliable and will be able to function much longer than the initially designed for the 3-month operation of the Yuytu rover.

The Chinese artificial satellite Quiqiao (marked in orange), whose orbit (marked in green) will be behind the Moon, will act as a relay for transmitting data to Earth from the new Chang’e-4 rover.

One of the most difficult challenges for the team involved in preparing the Chang’e-4 mission is the fact that the reverse side of the moon cannot be seen from Earth. Over time, the gravitational forces of our planet slowed down its rotation, so the satellite is now in constant tidal capture. In other words, the moon is always turned to us only by one side. Unfortunately, the inability to see the back side of the satellite makes it difficult to communicate with the rover and the landing module.

To solve the problem, China will send in May next year to the other side of the Moon an artificial satellite-repeater “Queqiao”, which will occupy the so-called Lissajous orbit. Being in this orbit, the probe will rotate approximately 60-80 thousand kilometers behind the moon at the so-called Langrange point L2. From this position, he will be able to see both the reverse side of the Moon and the Earth, where signals from the rover and the landing module will be relayed.

For communicating with the rover and the landing module, the satellite “Queuxiao” will use the three-centimeter range (frequency 5200-11000 MHz). In turn, the devices on the surface will transmit messages between themselves using microwave radio waves. To transmit messages between Queqiao and ground stations, the S band will be used (frequencies 1550-5200 MHz). China has recently increased the number of its ground stations, adding to the fact that new installations in Argentina and Namibia have already been installed in Jiamusi and Kashi — they are going to be used for transmitting telemetry from vehicles, tracking, and also transmitting commands for new scientific tasks.

When landing a combined spacecraft weighing 3780 kilograms, it is necessary to take into account the topography of the far side of the Moon, which differs significantly from the one on the side closest to us. The surface on the reverse side is very uneven, with only a few relatively flat areas – dark basalt plains, which are much larger on the near side. In addition, on the back side there is a very large difference in height and a more abundant crater coating. All this complicates the search for a sufficiently spacious and flat landing site. For the same landing module “Chang’e-3” the choice of the seat was carried out on an area of ​​hundreds of square kilometers. The location for Chang’e-4 will have to be chosen on the basis of just a few tens of square kilometers of suitable space.

Because of these restrictions, it was decided to land the Chang’e-4 vehicles in the Karman crater area, 180 kilometers in diameter, near the South Pole-Aitken basin. This place is the oldest and largest impact crater in the Solar System (2500 kilometers in diameter) and enjoys great interest from scientists because it may contain open areas of the lunar mantle, which can reveal new details about the evolutionary processes in the Earth system Moon. According to Ping Jinsong, who is responsible for the operation of the low-frequency spectrometer of the new lunar rover, the Karman crater was chosen not only for this reason. In fact, this is the only place in the South Pole-Aitken basin that has at least some flat surface suitable for planting. 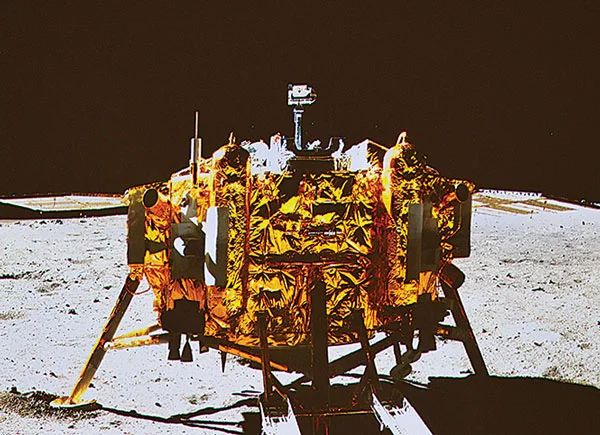 This photograph of the Chang’e-3 lander was taken by a lunar rover of the same mission in 2013.

The algorithms used by the subsystems of navigation and control of the Chang’e-4 devices, which are responsible for the movement of the landing module, its orientation in space and the construction of the course, have been significantly refined and adapted to the peculiarities of the relief of the far side of the Moon.

The apparatus will descend to the surface in six steps. The first three – deceleration, rapid adjustment of course and orientation, and also approaching the surface – will be controlled by the control center from the Earth. The remaining three – the hangup, descent safety check and, in fact, slow landing – will be performed by the boarding module in the autonomous mode. The radius of the area of ​​reduction of the apparatus will be about 450 kilometers; however, compared with the Chang’e-3, the new landing module and the lunar rover will land at a more right angle.

It should also be noted that the new landing module and the lunar rover are more adapted to work on the lunar surface, compared with previous vehicles. Both are equipped with power sources based on radioisotope thermoelectric generators, which will allow them to conduct temperature measurements of the surface. For example, during a moonlit night, the ambient temperature can drop here to almost -180 degrees Celsius. The Chinese space agency hopes that, with more thorough preparation, the new lunar mission will be more lasting and successful.