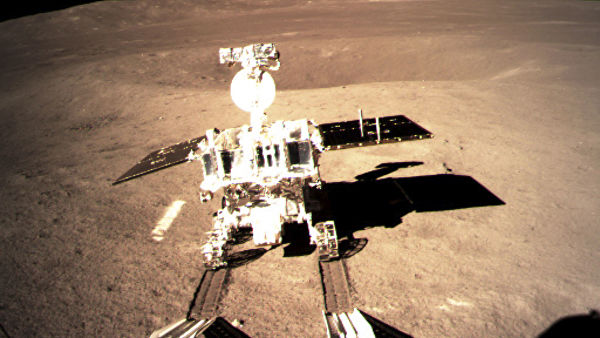 The Chinese lunar rover “Yuytu-2” (“The Jade Bunny-2”) explored the stones on the far side of the moon and had already covered 127 meters in total, the Chinese National Space Administration said in a statement.

The spacecraft Chang’e-4 and the lunar rover Yuytu-2, which have been exploring the opposite side of the moon since early January, waited for a moonlit night in sleep mode and woke up on March 1.

Due to the extremely low temperatures on the far side of the moon during the night period, the devices go into “sleep mode” in order to keep working for further experiments.

“After waking up, Chang’e-4” and the Lunokhod “The Jade Hare – 2” are working normally. The Lunokhod conducted research on stones and also studied the trail left on the ground from the wheels, “the agency said.

It is reported that the diameter of the largest stone studied is about 20 centimeters. During the sounding, the lunar rover was at a distance of 1.2 meters from the stones.

As of now, the lunar rover has covered a total of 127 meters.

Chang’e-4, on the morning of January 3, made a historic soft landing on the moon and within a few hours sent the first images of the surface of the back side of the satellite. The device has landed in the crater Karman, in the northwestern part of the largest known lunar crater, South Pole Basin – Aitken. The China National Space Administration has recognized the absolutely successful mission of Chang’e-4 in studying the far side of the moon.

During their stay on the far side of the Moon, Chinese spacecraft have already completed a number of tasks, including the first biological experiment in the history of mankind on the lunar surface, during which they managed to germinate cotton. Chang’e-4 regularly sends photographs of the surface of the far side of the moon, which greatly help scientists from around the world to further study the natural satellite of the Earth.