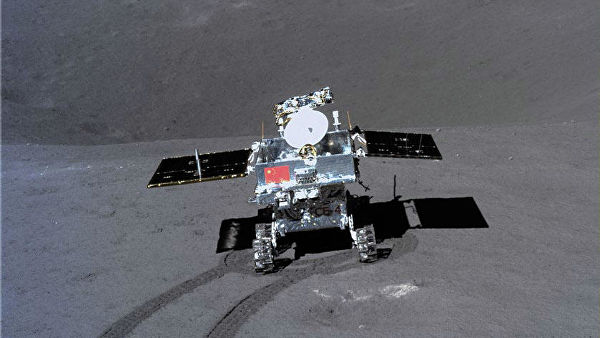 The Chinese lunar rover “Yuytu-2” discovered on the reverse side of the moon two types of rocks of the lunar mantle, in whose existence scientists doubted. Their study will shed light on the history of the formation of the Earth and its companions, write the mission’s participants in the journal Nature.

“Surprisingly, neither Apollo nor Soviet probes returned a single sample of the lunar mantle to Earth. Thus, Yuytu-2 received the first data on its composition, landing in a crater at the bottom of the South Pole-Aitken basin, where, as measurements by NASA probes showed, deep-seated subsoil rocks of the Moon could be hidden, ”comments Patrick Pignet, a planetologist from the University of Toulouse (France), on the discovery.

The Chinese Chang’e program of sensing the moon includes three stages: a flight around the Earth satellite, landing on the Moon, and returning samples from its surface to the Earth. The first two phases have already been successfully implemented by Chinese engineers and rocket engineers.

In 2013, China sent the moonwalker “Yuytu” to the moon, which means “jade hare”. He was on board the landing module “Chang’e-3” and sat in the crater of the Rainbow Bay on December 14, 2013. Yuytu was the first artificial object that made a soft landing on the moon since 1976, when the Soviet Luna-24 was launched.

This year, China began to implement the next phase of this program – the first landing in the history of the Earth on the opposite side of the Moon. To this end, in May last year, a unique communication satellite, Quieqiao, was launched, capable of supporting communication between the Chang’e-4 vehicle, the first mission on the far side of the moon, and the flight control center in Beijing.

This task was successfully solved in early January, when Chang’e-4 successfully sank to the bottom of the Pocket crater, located in the polar polar latitudes of the far side of the moon. The landing platform and the Yuuta-2 lunar rover successfully worked in an uncharted territory for more than four months and continue to study the Earth’s satellite today.

Today, the scientific team of Chang’e-4 presented to the public the first scientific data that collected the spectrometers of the Lunokhod Yuyu-2 during its wanderings around the crater. Scientists, as Chunlai Li, the head of the mission, and his colleagues note, have long been interested in what rocks the moon’s surface consists of and how much their composition varies at different points on its surface.

The fact is that scientists today believe that the bowels of the Earth and the Moon were formed according to quite different scenarios. Unlike our planet, there were no tectonic processes and rock circulation on its satellite. Its bowels cooled down quite quickly, several tens of millions of years after the collision of its mother with the Earth and its birth.

This should have led to the fact that all layers — the crust, the mantle, and the core — were to be composed of relatively homogeneous and identical in composition rocks whose analogues would not be present in other layers of its lithosphere. The only “visible” traces of the mantle should be found only in fairly deep and ancient craters that reach its boundary.

Over the past decades, no lunar probe has been able to find sufficiently large traces of mantle rocks in the largest craters on the moon. This led scientists to question the validity of this idea and begin to look for alternative theories describing the process of its formation, predicting a radically different composition of the mantle.

Prior to sending Chang’e-4 to the moon, as Lee notes, planetary scientists did not have the opportunity to test them, since all of the “earthly” samples of its matter are fragments of the lunar crust, in which pyroxene and olivine, two supposed main rocks of the mantle, completely absent.

Yuytu-2, according to Chinese researchers, ran into both types of these rocks almost immediately after he left Chang’e-4 and began to move around the neighboring regions of Karman crater. Their deposits, according to Lee, are found far from all regions of this excavation, which indicates an unusual history of their getting into this corner of the moon.

As researchers suggest, their source was the nearby Finsen crater, located even “lower” than its southern neighbor. Apparently, the wreckage of the lunar mantle was knocked out from its bottom in the distant past, from where they fell into the territory of a nearby crater, formed a little earlier.

In any case, this discovery, according to Lee, no longer suggests that the moon’s mantle does not contain olivine and pyroxene. Further measurements and experiments, which Chinese scientists plan to conduct with the help of “Yuytu-2”, will help to verify other theories describing the birth of the moon, and to understand which of them is closest to reality.