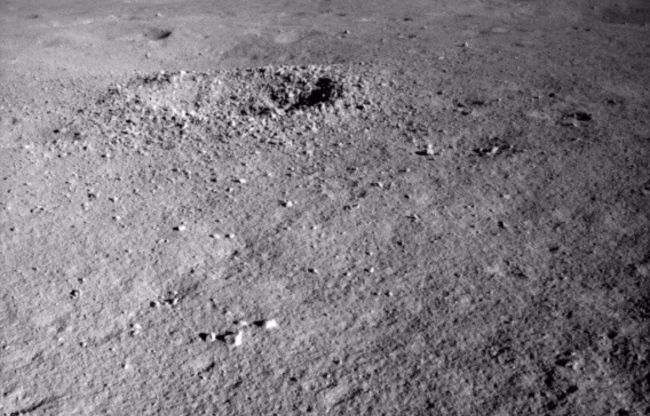 The Chang’e-4 Chinese lunar rover discovered gel-shaped material of an unusual color while examining the surface of the far side of the moon.

Rover “Yutu-2” of this mission came across an amazing object on the eighth lunar day, spent on the surface of the natural satellite of our planet. Intrigued by these unusual finds, the mission scientists put off all other planned rover trips in the hope of finding out the nature of the mysterious material.

The eighth lunar day began on July 25; Yutu-2 began to move in an area dotted with small impact funnels. On July 28, the Chang’e-4 mission team was preparing to immerse the Yutu-2 rover in a normal midday “sleep” to protect the lunar rover from high temperatures and the destructive radiation of the Sun high in the sky. One of the team members, checking the pictures taken with the main camera of the rover, noticed a small crater, which, judging by the photograph, contained material that was different in color and luster from the background surrounding it.

Inspired by these findings, the rover control team engaged planetologists in the study. Together, these two teams decided to postpone further trips of the Yutu-2 rover to the west, and instead examine in more detail the unusual material they discovered.

Using on-board cameras to avoid collisions with obstacles, Yutu-2 carefully approached the crater, and then guided this unusually colored material and its surroundings. Rover examined both of these areas with a Visible and Near-Infrared Spectrometer (VNIS). This tool, which allows you to analyze the chemical composition of the material by the light reflected from it or scattered by it, is known for using the lunar mantle material in the Karman crater in May.

To date, scientists have not been able to determine the nature of the mysterious colored substance and only state that the material is “gel-like” and has an “unusual color”. One of the possible explanations proposed by scientists who are not part of the scientific team of the Chang’e-4 mission is that the mysterious material is glass formed during the melting of rocks as a result of a cosmic collision of an asteroid with the surface of the moon.