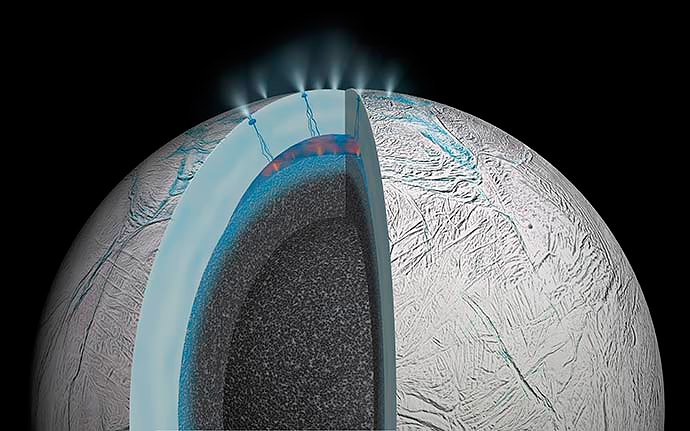 The subglacial ocean of Enceladus may be rich in phosphorus, which greatly increases the chances of life existing there. This is reported by the Xinhua News Agency, citing the authors of the study.

Enceladus is a small moon of Saturn with a diameter of only 500 kilometers. It is of great interest to scientists because it has a liquid under-ice ocean, the heat of which is maintained by tidal heating and radioactive decay in the stone core. In addition, through cracks in the ice crust, the ocean communicates with the outside world, which contributes to many important chemical processes for life and at the same time allows scientists to study the composition of the reservoir by its geysers.

Hao Jihua of the China University of Science and Technology decided to simulate the interaction of Enceladus rocks with water. The ocean water on the satellite turned out to be highly alkaline (very salty) and devoid of oxygen, which resembles the sparkling water that people drink on Earth, ”the scientists explain. In his opinion, in order for the phosphorus from the rocks of Enceladus to dissolve in such “carbonated” ocean water, it would take more than 100 thousand years. The ocean on Enceladus is thought to have been in existence for over 100 million years. Phosphorus plays a key role in the origin of life, as it is part of the DNA and other molecules of organisms. This model was built on the basis of data obtained by the Cassini spacecraft during its flight through the geysers of Enceladus.

Thus, the composition of the subglacial ocean should be similar to that of the Earth in terms of phosphorus content, which increases the chances of life existing in it.