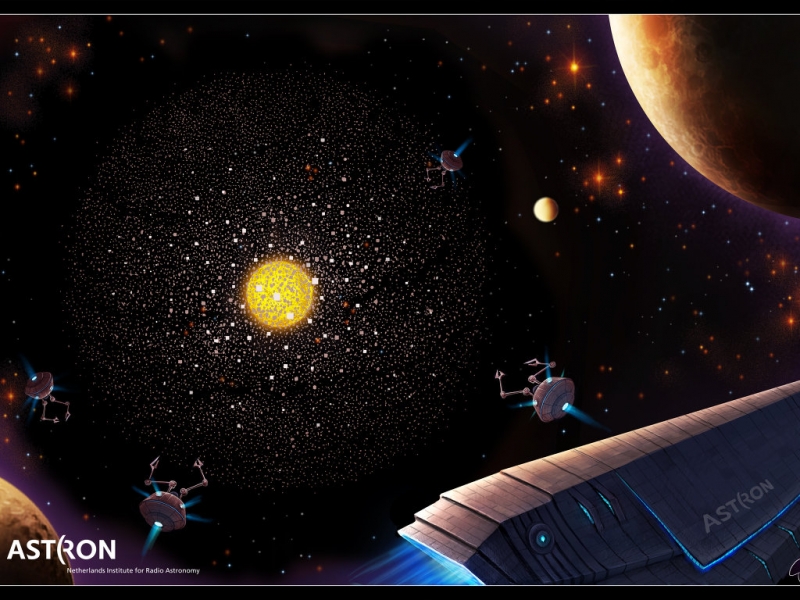 Strange “flashing” of the star KIC 8462852 that some scientists believe the traces of the presence of advanced aliens, could not occur as a result of collision of several planets and the formation of clouds of dust, say astronomers in an article published in the journal Monthly Notices of the Royal Astronomical Society.

In mid-October, astronomers from Yale University spoke about unusual fluctuations in the brightness of the star KIC 8462852 in the constellation of Cygnus, the strength of the glow which had twice been reduced by almost a quarter. These “blink” for the first time raised the possibility of the presence in its vicinity of the so-called Dyson sphere, created a highly developed civilization of aliens.

It tells Lars Christensen (Lars Kristensen) from the Harvard-Smithsonian astrophysical Observatory (USA), the discoverers of these flashes had three “natural” theories, explaining puzzling data fluctuations in the brightness of the light collision of small planets, asteroids cluster at one point in the system or the passing of an entire “swarm” of comets in the disk of the star.

Christensen and his colleagues hypothesized that the implementation of the first scenario should leave visible traces for us – a cloud of dust, periodically closing was shining, and lots of debris and dust throughout the system. This dust, as the scientists explain, has to be highly visible to radio telescopes operating in the microwave range of frequencies.

Following this idea, the authors followed the system KIC 8462852 using two telescopes – SMA, operating in the millimeter range, and camera SCUBA-2 on the telescope James Maxwell, working in the submillimeter part of the spectrum.

A long observation of KIC 8462852 yielded no results – neither the one nor the other the telescope failed to record the presence of any significant accumulations of dust, neither in the inner nor in the outer regions of this star system. The mass of dust, according to the calculations of Christensen group, below the mass of the Earth about 3 million times in its proximal part, and 6000 times lower in almost the entire system.

This means that planets collision could hardly occur in the vicinity of the KIC 8462852 – this amount of dust, according to scientists, is equivalent to only one-tenth of the mass of largest dwarf planet like Ceres, which is clearly less than would remain after a collision between two small planets even.

No dust, according to Christensen and his colleagues, speaks in favor of the “comet” theory, however, it is also not without problems – according to the calculations of planetary scientists, the fall in the brightness of KIC 8462852 recorded “Kepler” would require the simultaneous collision from 30 major comets and other debris in Roy, which is also quite unlikely.

Does this mean that “flashing” the KIC 8462852 really caused by aliens? According to Christensen, these irregular drop in brightness can be explained by other, less known to us phenomena.

For example, the authors of the article believe that the drop in brightness could be caused by giant dust disk with a length of 300 million kilometres, orbiting this star, which is to us the “end” that makes it virtually invisible to us. Overall, we can say that the mystery of the “alien times” KIC 8462852 still remains unsolved.