Clearest image of the Carina Nebula 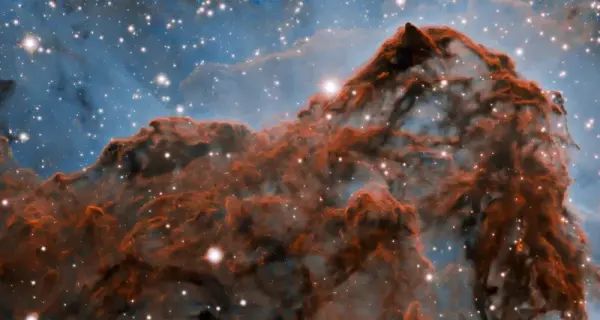 Telescopes at the Gemini Observatory in Chile have helped astronomers capture the clearest images of the Carina Nebula, a dense cloud of dust and gas in which stars are actively forming.

The interstellar clouds are real nurseries for the stars. It is there that the magic of the universe takes place, and cosmic luminaries are born. Every scientist dreams of looking there, so a new image of the nebula in such a good quality is a great astronomical event.

“The resulting image is stunning,” said astronomer Patrick Hartigan of Rice University. “We see a lot of detail never before seen along the edge of the cloud, including the long series of parallel ridges that can be created by the magnetic field, as well as an almost perfectly smooth sine wave.”

A star cannot be born anywhere. For its formation, a thick cloud of gas and dust, rich in molecular hydrogen, is needed. The most suitable places for the appearance of new luminaries are always the densest. Such clouds appear opaque, like dark voids against the background of twinkling stars. Unfortunately, this is what makes them difficult to learn. For example, Hubble works with ultraviolet and optical radiation, which is blocked by dust in such star-forming regions.

But infrared radiation can penetrate thick dust, allowing astronomers to look inside these mysterious clouds. It is in such cases that Gemini telescopes have a clear advantage over the famous Hubble.

“The new images of this nebula are much clearer than anything we’ve seen before. They provide the clearest picture to date of how massive young stars affect their surroundings and the formation of stars and planets, ”the astronomers comment.