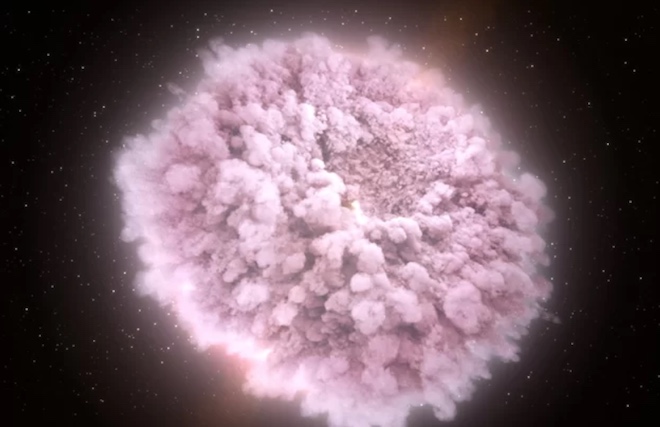 Giant energy explosions create cloud-mushrooms on remote neutron stars, and a new NASA telescope can see how they rise, cool down and collapse in real time.

Astronomers suspected the existence of cloud-mushrooms for a long time. But they were too far to be considered in detail, says NASA scientist Zaven Arzumanyan.

“This is a very rapid rise of the radiation flux (brightness of the star, as it is visible from the Earth), which disappears, and then returns and slowly fades,” Arzumanyan says. – We realized that we probably see a cloud-mushroom on a neutron star, rising and cooling to a value when it leaves the sensitivity range (our existing sensors), and then falling back to the surface and heating again. ”

But apart from the two flickers that appear periodically during observations of neutron stars, the researchers could not see anything else. This changed due to the X-ray telescope NICER, which was installed on the International Space Station in June 2017.

NICER does not see the clouds-mushrooms the way people see them. He does not make beautiful Hubble photos. But by carefully studying the graphs of the change in light from these neutron stars, astronomers can make accurate measurements of the temperature and size of clouds that escape from the solid crust of neutron stars.

Through the orbiting telescope, Arzumanyan’s team observed how clouds reach a height of 15-150 km above the surface of neutron stars. Although the exact dimensions of neutron stars are still unknown, it is believed that they do not grow more than 64 km in width.

The group was also able to observe many explosions in a row on the same star. At some point, the star threw out the clouds-mushrooms every 13 minutes for an hour. Each cloud was weaker than the previous one.

Arzumanyan believes that the gradual weakening of the explosions was the result of the fact that the neutron star did not have enough time to fully recover. Thus, less and less energy was thrown into the atmosphere every time.