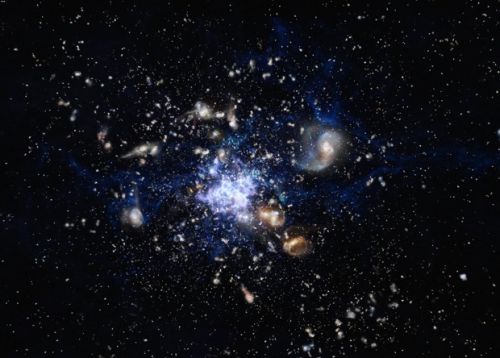 Astrophysicists managed to obtain the data demonstrating that the largest galaxies in the observed Universe could be created from cold gas clouds. The work of scientists published in the Science magazine confirms the theory about evolution of similar astronomical objects.

Computer simulations foretell that big galaxies have to be formed in two stages. At first, when they are at early stages of the existence (the first several billion years), stars are born in them from big congestions of gas. After galaxies “grow up”, they begin to absorb other, smaller galaxies, thus increasing in sizes. During observations of large galaxies from which light went to us 10 billion years researchers generally managed to see only the second stage of their evolution, however authors of new article have submitted the data proving that the stage of “cannibalism” is really preceded by a stage of formation of stars in huge gas clouds.

Astrophysicists watched the wrong galaxy the Web (MRC 1138–262) which is removed from us on distance 10,6 billion light years. She has been opened by scientists at the end of the last century and represents a congestion of small protogalaxies which, most likely, will merge over time in one huge elliptic galaxy. In the center of a congestion there is a radio galaxy with a supermassive black hole which, according to researchers, will become a kernel of a new galaxy.

Researchers studied MRC 1138–262 by means of the ATCA and Very Large Array telescopes. They have found out that the central radio galaxy is surrounded by a dense cloud of gas which, in their opinion, consists of a large amount of molecular hydrogen (on what specifies presence of monoxide of the carbon which is easier giving in to observation). It stretches for distance the 70th kiloparsec (for comparison, the Milky Way in the diameter reaches everything near the 30th kiloparsec), and his weight is estimated approximately at hundred billion mass of the Sun.

The cloud of gas opened by scientists was unexpectedly cold: his temperature doesn’t exceed 200 degrees Celsius. “We expected to see severe processes — for example, a set of the merging galaxies which will warm surrounding gas. All cold gas had to be locked in these galaxies” — one of authors of work declares.

How this cloud has appeared in the center of a congestion, researchers don’t know. According to them, monoxide of carbon indicates that earlier there were explosions supernew which made the previous generation of stars, however precisely to explain why gas has accumulated in this area, astrophysicists can’t yet.

Recently astronomers managed to find other interesting congestion of galaxies which has appeared when from 2 to 6 billion years were our Universe. It includes the dwarfish galaxies which are very difficult giving in to observation because of low luminosity. It was succeeded to see them with the help of a gravitational linzirovaniye which often helps astronomers to find far objects. Thanks to this effect recently also it has for the first time turned out to describe an internal structure of the galaxy located in 11,7 billion light years from Earth.