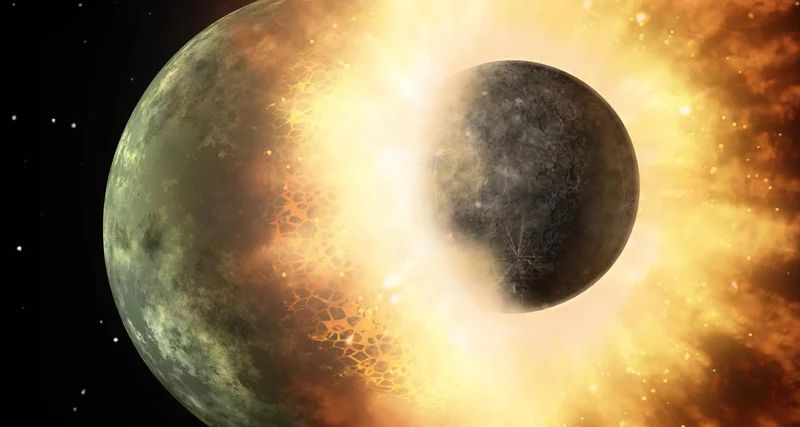 Scientists have found significant differences between terrestrial and lunar rocks.

There is a theory that the Moon formed when a Mars-sized planet called Thea crashed into the young Earth 4.4 billion years ago. The material ejected into space later formed a new celestial body – the Moon.

Scientists have found new evidence in the lunar rocks that the Moon was likely formed as a result of the collision of the Earth and Thea more than 4 billion years ago.

NASA researchers have re-examined the moon rocks brought to Earth by Apollo astronauts more than 50 years ago with modern instruments that researchers did not have in the 1960s and 1970s. As a result, scientists have found new evidence for the giant collision theory by focusing on the amount and type of chlorine in rocks.

There is a higher concentration of “heavy” chlorine on the moon. There is more “light” chlorine on Earth. The terms “heavy” and “light” refer to different types of chlorine atoms known as isotopes, which contain different numbers of neutrons in their nuclei.

Both the Moon and the Earth originally had in their composition the same mixture of “light” and “heavy” isotopes of chlorine. But over time, the ratio changed as Earth’s gravity pushed the newly forming moon. Our planet attracted the lighter chlorine to itself, leaving the heavier on the satellite.

“There is a huge difference between the present day elemental composition of the Earth and the Moon, and we wanted to know why,” said NASA planetary scientist Justin Simon, co-author of the study. “Now we figured out that it was probably a collision.”

Scientists have also studied other halogen elements from the same chemical family as chlorine. It turned out that “light” halogens are also less common on the Moon than on Earth.