Color of the Martian sky 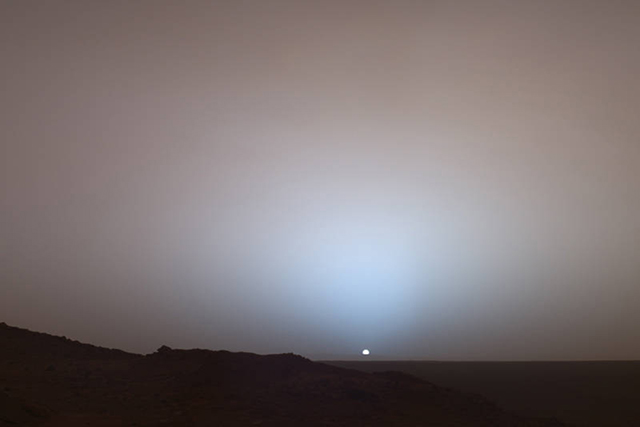 At the moment there are many photos of Mars, but not all from them allow to judge color of the sky on this planet. On many of them the balance white therefore our sight doesn’t allow us to distinguish contrasts in these photos is too high. Fortunately, there are quite interesting researches in which scientists try to distinguish colors in the sky of Mars and to explain them with physical regularities.

Within the Mars Exploration Rover program scientists of NASA delivered Spirit, Oppotunity and Bell III mars rovers to the red planet. Mars rovers were equipped with the panoramic cameras Pancam Instrument. Scientists received the radiometric calibrated images by which it is possible to define color of the sky. Data of images were transformed to physical quantities (a flow and shine) taking into account spectral sensitivity of the camera and filters, the sunlight reaching the surface of Mars, and other factors. Spirit and Oppotunitysfotografirovali the bluish-black and black sky in those layers of the atmosphere where there is no dust. However the most part of time in the atmosphere of Mars there is a lot of dust therefore most often the sky of other color.

Color of the sky on Mars depends on how sunlight dissipates from a direct light beam and lights a surface, and also how scattered beams are absorbed by molecules and particles in the atmosphere. For example, if there was no atmosphere as on the Moon, then there would be a dark sky and the yellow Sun. On Earth the sky blue because of Rayleigh scattering because of which molecules with a radius less than a wavelength of radiation (about 1/10) dissipate on shorter waves better. At the same time dispersion section in inverse proportion to the fourth level of wavelength.

The atmosphere of Mars is much thinner therefore molecular dispersion is less effective. The Martian dust, perhaps, plays the same role, as air molecules on Earth which disperse short waves of light and promote formation of the blue sky and a red decline on Earth. It would also work at Mars if particles scattered light without any absorption. However the Martian dust is rich with the blue absorbing iron oxide which has a converse effect and just takes away short waves of light from a radiant flux.

Mars rovers made pictures “dark yellowish-brownish” the sky in a regular situation when a lot of dust remains in the atmosphere of Mars. But as sometimes because of dust the sky seems to more blue (because of light dispersion) or red (because of light absorption), more deep understanding is necessary here. Curt Elers and his colleagues conducted a research which is appreciated by all who are familiar with atmospheric optics. Elers and colleagues considered complex effect of the dust of the micron size absorbing blue light and showed that reddening is a little more effective and leads to yellowish brown color of the sky in “dusty situations”. Besides, longer waves (red) and shorter waves (blue) dissipate in very different ways, having interesting effect, such as a blue luminescence which follows the Sun on the way to the sky of Mars.

According to this research, the sky of yellowish-brownish color, and the Sun shines blue and it is especially well visible during a decline. But all this is more difficult, than it is possible to provide. As Mars is at distance of 1,5 astronomical units from the Sun, the amount of light on a surface is twice less, than on Earth. Because of insufficient lighting our eyes switch sensitivity to blue light because we switch from use of the flasks sensitive to color, to use of the sticks which aren’t perceiving color. It is called effect Purkin. Therefore the first astronaut who will appear on Mars probably will describe the sky more blue, than it is possible to expect.