Color vortices of the clouds of Jupiter 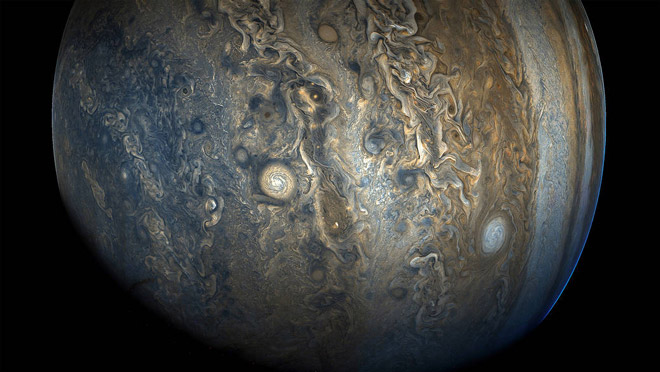 The southern hemisphere of Jupiter is a swirling, whirling sea of ​​colored clouds in a new image from NASA’s apparatus “Juno” and two amateur astronomers.

The new image was created on the basis of the information gathered by the JunoKam tool on October 24, 2017, when the Juno apparatus performed its ninth close approach to Jupiter (the eighth scientific), according to NASA. The primary data from the tool were uploaded to the JunoKam website, and the learned lovers Gerald Eichstedt and Sean Doran processed them to create the image above.

The photograph captured the complex currents that the Juno discovered in the cloud peaks of Jupiter. The spacecraft was at an altitude of 33,115 km above the tops of the clouds, when he took this picture at a latitude of -52.96 degrees.

The orbit of Juno around Jupiter allows the device to approach the gas giant for only a few hours every 53 days. The spacecraft makes a closed loop around the planet, crossing perpendicular Jovian equator along the poles. The northern hemisphere of the planet was also filmed by JunoKam.

“JunoKam” can not take pictures throughout the entire approach, so the regions for the images are planned for each close approximation. Amateur scientists vote on which areas JunoKam should aim at this time.

From the first scientific approach of “Juno” to Jupiter, amateur scientists process the initial data of “JunoKam” in creative ways to create delightful scientific and artistic images.