Comet Churyumov – the key to the history of the solar system 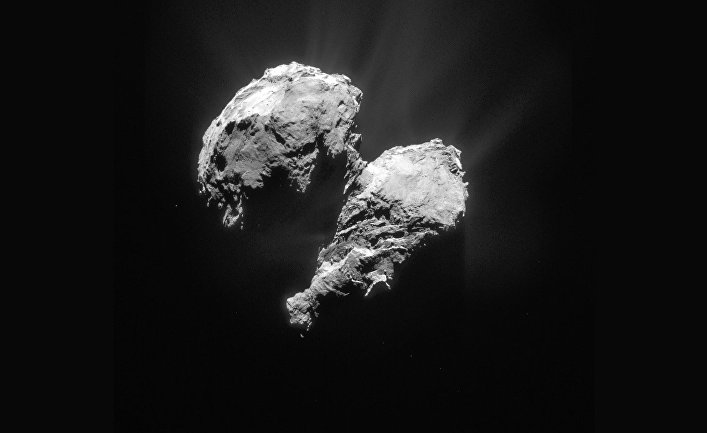 We usually do not consider dust something of value. If, of course, it is not from outer space … To be more precise, from Churyumov’s comet. Published at the end of last year, the results of a study of the composition of this dust made it possible to obtain valuable information about this celestial body and, in general, the history of the solar system.

The source of these results was the scientific group of the COSIMA tool, that is, the secondary ion mass spectrometer, which is on board the European space probe Rosetta. He studied the comet Churyumov – Gerasimenko (67P / Churyumov – Gerasimenko) from August 2014 to September 2016 in the smallest detail. COSIMA analyzed dust particles that were thrown out of the comet’s core, which allowed to study their composition.

The results of the study indicate that, on average, half the mass of each particle is accounted for by the carbon material of a predominantly macromolecular structure. The second half is mostly occupied by anhydrous silicates. So, what is the significance and interest of these results? And what do they entail? Scientists were waiting for something similar, or is all this fundamentally contrary to existing theories?

“Rosetta” and its tools allowed us to form a more accurate picture of the composition of Comet Churyumov and in particular the gases from its tail thanks to the device ROSINA. During travel around the Sun, the comet continuously releases gas and dust, which form around it a kind of halo. This phenomenon is explained by the sublimation of the ice that is contained in the comet: they pass directly from solid to gaseous state. In parallel with this, there is a release of tiny dust particles, which carry away the tail of the comet. ROSINA conducted an analysis of the composition and amount of gas in the tail: it turned out that it consists of water vapor, carbon dioxide, carbon monoxide, molecular oxygen and many small organic compounds, which are mostly formed from carbon, hydrogen, nitrogen and oxygen.

Other instruments, such as cameras and the VIRTIS spectrometer, examined the surface of the comet. It has a complex structure: cliffs, dips, faults, depressions … In addition, it differs in dark color and very little presence of ice. The shade is associated with its chemical composition, in particular with a high content of carbon. Taking into account that only a small fraction of the total substance is required for ice and gas, scientists are striving to learn more about the nucleus of the comet by analyzing dust particles released from it. They are samples of its structure, and the study of their chemical properties allows you to get an idea of ​​the nucleus of the comet.

COSIMA is a kind of physico-chemical mini-laboratory whose goal was to collect the dust particles released from the comet, take a picture of them and conduct the analysis by time-of-flight secondary ion mass spectrometry. For two years, collecting data from the comet was an unexpected way for scientists and engineers who developed the tool two decades ago. So, COSIMA managed to collect more than 35,000 particles, the largest of which reach a millimeter in diameter: all waited for a much smaller number and much smaller sizes.

Then a long and obstructed work was started. It was necessary to carry out the mass spectrometry of some of the collected particles: about 250. These particles, which were virtually untouched after being released from the comet, have virtually no analogs in our laboratories, and the time-of-flight secondary ion mass spectrometry method itself creates difficulties even in the laboratory, while in space and at a distance it was equivalent to a feat!

Measurements made it possible to determine the elementary composition of the particles, that is, the content of the main elements (oxygen, carbon, silicon, iron, magnesium, sodium, nitrogen, aluminum, calcium, etc.) and to obtain certain information about the chemical nature of a number of constituents. On the basis of these data, specialists demonstrated that about 50% of the mass in a dust particle (diameter from 0.05 to 1 mm) is a carbon substance. In addition, it is mostly macromolecular in nature, that is, it consists of large, but completely disorderly and complex structures. The second half is mainly for anhydrous silicates.

According to the measurements, the composition is not related to the particle collection date. In other words, there was no difference in the composition of those that were released by the comet before, during and after perihelion (the moment of maximum approach to the Sun and the highest activity in August 2015). The composition of the particles does not depend either on their size or morphology (“flake formation” or “dense particle”). All the analyzed particles are fragments of the nucleus released from the surface of the comet and from the depressions that go into the depths. Thus, a certain COSIMA average composition with a high probability of reflecting the overall composition of the nucleus of comet Churyumov. The bulk of the comet’s substance consists of a mixture of minerals and solid carbon compounds.

These results, as well as the data obtained 30 years ago by Giotto and Vega probes from Halley’s comet, prove that comets are among the carbon-rich objects in the solar system. The specialists had suspicions about this, but now they have received the first experimental confirmation. Established COSIMA high content of carbon and silicon is very close to what is observed on the surface of the sun. In addition, there are no noticeable traces of the action of liquid water in the dust particles of comet Churyumov silicates. Two of these points are a significant confirmation of the primary nature of this substance of the comet. All this means that the substance practically did not change after the formation of the comet. Thus, its study allows us to look at the very beginning of the existence of the solar system almost 4.5 billion years ago!

In conjunction with observations of other Rosetta instruments, COSIMA measurements indicate that most of the comet’s carbonaceous matter is contained not in ice or gas, but in dust in the described non-volatile macromolecular form. This result confirms the direction of the conducted analyzes of substances of extraterrestrial origin (meteorites, micrometeorites and particles of interplanetary dust). Be that as it may, unlike the dust collected by COSIMA, the source of this substance (an asteroid, a comet or other celestial body) is rarely established. In addition, high heating after entering the atmosphere, at least partially changes the composition of carbon compounds. At the same time, the COSIMA research directly on site and the collection of dust particles at a low speed (only a few meters per second) allowed the chemical information to be completely preserved. Thus, if we say today that comets like 67P / Churyumov-Gerasimenko played a role in the appearance of life on Earth, bringing there a carbon-rich substance, it seems that it appeared in such a complex macromolecular structure.