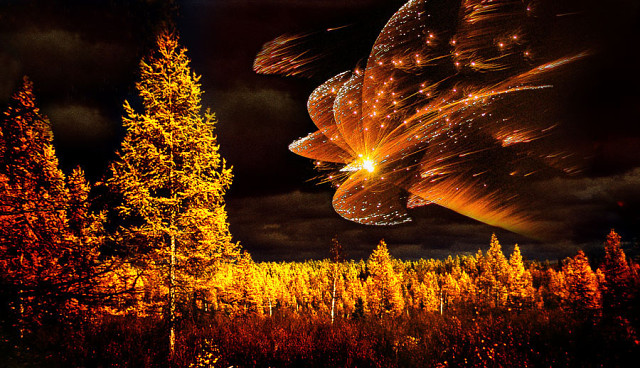 At the end of the seventies of the last century, the publishing house Znaniye published an interesting book by doctors of technical sciences V.P. Burdakova and Yu.P. Danilov, in which these scientists, who made a great contribution to theoretical and practical astronautics, wondered if intelligent life could move through galactic and intergalactic spaces on man-made “islands”, which we, terrestrial observers, sometimes mistakenly identify with comets?

Finally, is it justifiable to limit the search for extraterrestrial intelligence by listening to radio signals coming from distant planetary systems? But even in this situation, the rule is that the seemingly new arguments, in fact, are quite old. And discovered by a British astronomer Denning in 1881, a comet that does not give astonomers astonishing glaring strangeness of behavior, this is a strong confirmation of this.

The signs of atypical behavior of the comet, which was given the index of the 1881 V is more than enough. It was surprising, for example, that unlike other similar bodies, it did not approach close to the Sun and instead of the traditional lush tail had a barely noticeable rudiment. Scientists, using modern computing tools, powerful optical instruments, data coming from artificial Earth satellites, found that at first the comet visited the neighborhood of our planet, then approached Mars for a distance of nine million kilometers. Then, from Venus, it was three million away, and from the orbit of the colossus of Jupiter – two and a half million kilometers. The impression was that the comet of Denning was controllable and she was cosmic.

Is it so? So, if we draw analogies with the NASA project “Big Tour”. The essence of the global program was that the robot, stuffed with smart electronics, relying on the gold postulates of Newton’s theory of gravity, should alternately pass in the closest proximity to several planets of the solar system. Filigreed algorithms provided a unique effect when the planets with their gravitational fields were accelerated, braked the device, throwing it like a shuttlecock from one desired planet to another. The implementation of the planned event is planned to be held in the middle of the next decade. The delay is caused by the fact that mankind does not yet have at least one third of computing resources that fall under the definition of artificial intelligence.

American scientist Stefan Berg, one of the technical inspirers of Operation “The Big Tour,” believes that a group of NASA scientists outstripped more than a hundred years ago the crew of the interstellar ship known to us as comet 1881 V, purposefully, selectively flying around, deeply probing the terrestrial planets. The professional astronomer Berg does not hide the fact that there are other comets marked by the influence of the “perfect mind”, the protruding space trails. Among such bodies is also the comet 1882 II discovered in 1882, the “location” of the tail is not affected by the omnipotent cosmic wind.

Moreover, the spectral analysis of the tail revealed chrome, nickel, and iron components in it, associated erosion of the refractory nozzles of liquid rocket engines, when jets of hot gases flow out of them. The comet, discovered in 1926, also created an artificial traction force. Probably because she flew, not obeying the laws of celestial mechanics, but in spite of it. Comet Rent-Rolana, opened in 1956 in general had not one, but two tails! The first one – the “normal” one was aimed from the Sun. The second, unusual, behaved like a pulse rocket engine.

Powerfully lashed in the opposite direction, disappeared, then appeared again and again. And the speed of the expiration of the “working body” was the same as that of the current chemical rocket engines – about three thousand meters per second. So, someone has solved such a difficult technical task in parallel with the earthlings. Stefan Berg says that such anomalies personally leave little doubt in him that comets have saddled our neighbors in the solar system. They use tools that are similar to our technological developments. As an astronomer, in the habitation of some comets he was convinced that they appear with a “dosed” periodicity – once in a decade.

Despite the seemingly convincing arguments in favor of the fact that the comets can be converted into space wandering through space, this hypothesis has many opponents. They defend the view that like everything in the bony nature of a comet can be very diverse, to imitate elements of controllability and intelligence. After all, we do not call intelligent bees or termites, demonstrating the wonders of cleverness, organization, including hierarchical. Opponents, meanwhile, do not surrender and need to be acknowledged, actively gaining ground by facts illustrating the habitability and controllability of comets. In this connection, radio astronomers and engineers who construct and test new radio communication systems have their weighty word. It was they who drew attention to the so-called effects of anomalous cometary radio packets.

His review of the evidence on cometary radio sounds accumulated over almost a century, the Russian physicist, Doctor of Technical Sciences Alexander Troshin, begins with “almost the main of the riddles of the comet Rent-Roland.” It is with the fact that on May 10, 1957, US astrophysicists recorded the “roaming” radio emission coming from it. The radiation source was first on the comet itself, then, gaining acceleration, passed along the tail, then “by itself began to move away from it.” Is it possible that a reconnaissance ship, such as a UFO, separated from the comet-settlement?

Maybe they just camouflaged their own ungrounded guesses. However, the fathers of the radio – Nikola Tesla, Guglielmo Marconi, Alexander Popov, at the dawn of the last century quite seriously said that, experimenting with coherent receivers and full-length “long-beam” antennas raised to great heights, sensitive phone capsules repeatedly received signals similar not to “sobbing Babble of a child. ”

Marconi, and then the assistant of Popov Rybkin connected the effects of “ethereal speaking in unknown languages” with the cosmos, with the planets Mars, Venus, meteorite streams, meteors.

“Foreign to us live voices, sequences of whistling and clicking coded signals, absolutely unlike the codes of Bodo, Morse, Hughes, give me the right to assert that the transmitters, their modulating, are not only located outside the Earth, but move, bouncing into space, hanging over Layers that border on the earth’s atmosphere, “Marconi said on August 3, 1919.

Two days later, speaking at the Rome Electrotechnical Society, he said that, most likely, contact with extraterrestrials in the air should be expected no later than the end of the twentieth century, when there would appear the lack of their own noises of meaningful radio signals isolated by means of “thinking machines” from Chaos of noise of natural and technogenic nature.

As the scientist looked into the water, foreseeing the birth of computers and receiving equipment of fantastic sensitivity. In one Marconi miscalculated. There was neither an ethereal bilateral contact with representatives of other worlds, nor was there. At the same time, both radio astronomers, military and civilian signalers take on their receivers a lot of mysterious, requiring decoding and comprehension. It is hardly accidental that mysterious sound signals again come from meteors. On the Internet, even the frequency is mentioned, on which every purchased receiver-scanner can hear aliens – 420 megahertz.

By the way, Russian hunters for the voices of aliens are impressive achievements recognized by academic science. The World Bank of these records is gradually replenished. When a critical array of data is reached, linguists and mathematicians intend to decipher the cosmic language, guided by the principles of associative logic. It would be great to know that the extraterrestrials are thinking about us. There, you see, and communication with the eye in the eye will come.