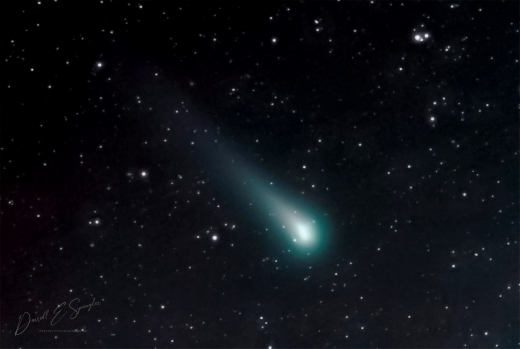 The brightest comet of the year is approaching Earth. On December 12, 2021, Comet Leonard (C/2021 A1) will be only 35 million kilometers from Earth and may be visible to the naked eye in the morning sky.

“This is my first picture of Comet Leonard,” reports Darrell Spangler of Estes Park, Colorado. “It turned out much brighter than I expected.”

Spangler photographed the comet Nov. 30 with a 2.4-inch Raptor Radian telescope and a Canon 5Ds digital camera. “It was an easy target,” he says.

Comet Leonard is now in the northern constellation of Canes Venatici (Hunting Dogs), shining as an obscure +7th magnitude star. Within 10 days, the comet’s brightness will increase dramatically. Most forecasters agree that Comet Leonard will reach a magnitude of +4, easily observed with small telescopes and visible to the naked eye from places of dark sky in the second week of December.

When the comet approaches the Sun in early January, the direct scattering of sunlight through the comet’s dusty atmosphere could create an additional burst of brightness up to +1 magnitude.

The same phenomenon happened to comet McNaught in 2007, making it visible in daylight.