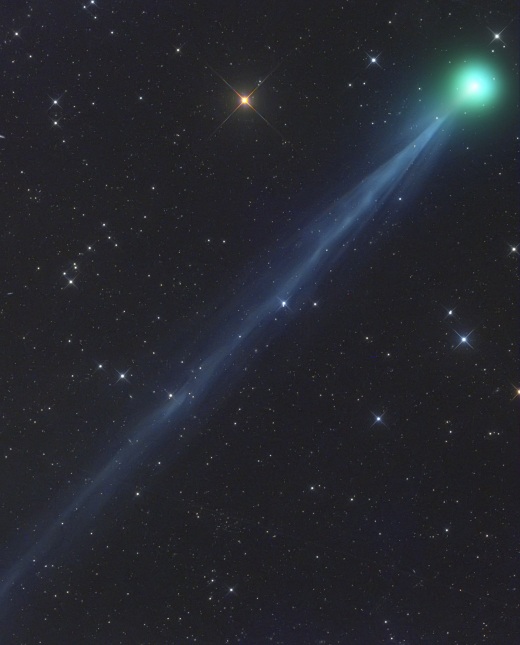 Comet “Swan” brightens rapidly gaining brightness and, according to astronomers, the luminosity has already reached magnitude +5.5. At the moment, the comet for the human eye is nothing more than a dim luminous ball, but the view through the telescope is amazing.

“It’s a 30-minute exposure through my 12-inch telescope,” said Reman from Namibia, who also did a great comet animation. In just 40 minutes of tracking, you can see complex waves and curls of gas diverging along the tail of the comet.

The comet’s tail is so long that Remann could not fit it into sight. “In my photograph, it’s about 1.2 degrees long,” he says. However, I know from friends who took pictures of wider fields that it actually extends about 8 degrees across the sky. For comparison, the Ursa Major’s bowl is wide 10 degrees.

The swan comet closest to Earth is May 12 at a distance of 0.56 AS. It is not very close, but it can be a good show anyway. If current trends continue, the comet will become brighter to 3rd magnitude or better, like the Pleiades stars. Observers in the Southern Hemisphere will have few problems seeing her as she glides through the constellation Pisces.

Much of the comet swan remains unknown. It was discovered just a few weeks ago, on April 11, when a sudden release of hydrogen by a comet made him appear in data from the SWAN tool of the solar and heliospheric observatory.

The hyperbolic orbit of the swan comet suggests that it may be the first visitor to the inner solar system. Such newcomers are notorious for their unpredictability, so no one can say for sure what will happen next.