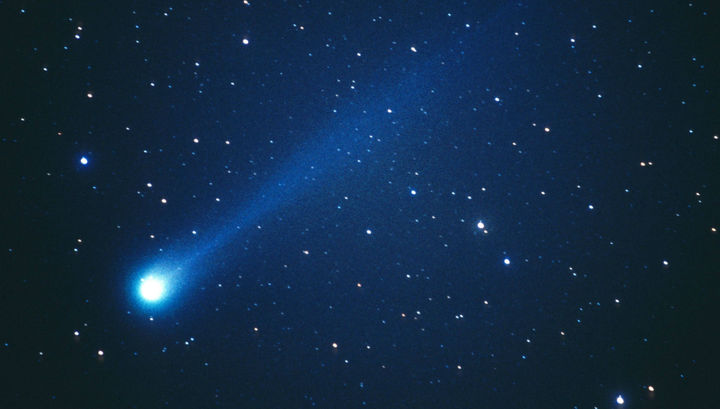 Where does the X-ray radiation of the “tailed stars” come from? New experiments give an answer to this question. However, the processes reproduced in the laboratory occur not only on comets. They can provide the key to understanding many phenomena in astrophysics.

A scientific article published by researchers from 15 scientific centers in the journal Nature Physics tells about achievement.

For an astronomer, X-ray radiation is the first sign of a high temperature. Streams of “X-rays” The universe is covered with hot gas, whether it is a solar flare or the violent power of a quasar.

How, then, to be with comets, literally consisting of ice? For quite some time scientists have assumed that the same mechanism operates here as in a medical X-ray apparatus (there, too, no one heats plasma to millions of degrees). When the fast electrons are sufficiently decelerated, they flash their energy in the form of “X-rays.”

Where do these electrons come from? Obviously, these are particles of the solar wind, in such quantity they can take no more from nowhere. But after all, the electrons emitted by the Sun do not at all have the speed needed to generate X-rays. They are much more leisurely. To sit on a comet, of course, it is possible, but to assume that each of them is mounted a small accelerator – this is perhaps too extravagant hypothesis.

However, accelerators are not only man-made. Charged particles accelerate any electric field. It is only necessary to understand where a field with the required parameters will come from on a block of cosmic ice.

To understand the issue, the researchers conducted a series of experiments on a laser installation LULI in Paris. Experiments simulated the effect of solar wind on a comet.

The researchers sent the laser beam to a thin layer of plastic. The energy of the beam transformed matter into ionized gas, that is, plasma. It mimics the solar wind plasma. About a centimeter from the target was a solid sphere playing the role of a comet.

Careful experiments and theoretical calculations made it possible to reveal the mechanism of acceleration. It turned out that the problem is the turbulence of the plasma that occurs when a collision with an obstacle occurs. Without going into the mathematical details, this condition can be described as “bubbling” or “vzbalamuchennost.” A clear idea of ​​it is given by rapids on a mountain river or foamy band of the sea.

The point is that the plasma is a gas from charged particles. The motion of charges is an electric current that generates a magnetic field. But since the turbulent plasma moves chaotically, this magnetic field changes all the time. A variable magnetic field, as is known, generates an electric field. This is the last and disperses the particles to the required energies. To give them such energy in a thermal way, it would take the substance to be heated to millions of degrees.

The value of the results obtained is not limited to the study of comets. They can be useful in various fields of astrophysics.

The co-author of the study, Bob Bingham of the Rutherford-Appleton Laboratory, UK, explains: “These experimental results are important because they provide direct laboratory evidence that objects moving through a magnetized plasma can be the site of electron acceleration – a very general situation in astrophysics, which takes place not only on comets, but also in the magnetospheres of planets, such as our own Earth, or even in supernova remnants, where the ejected matter moves through interstellar gas. We also confirm the theoretical models developed by the team. ”

One of the mysteries on which this research sheds light is the problem of high-energy cosmic rays. For decades, astronomers have been arguing which mechanism drives these particles to enormous energies. The most promising is the hypothesis of shock waves in a plasma, which transmit their energy to them. But, in order to “recharge energy” from such a source, the particle must initially have a certain threshold speed. That is, it is necessary, so to speak, a starter accelerator, and it is required to explain how it works. This issue is known to specialists as an injection problem.

A new study suggests a mechanism for such a “primary acceleration” and, perhaps, thereby solves the injection problem. So, the universe is becoming a little clearer.