Confirmed the inverse relationship of sunspots from outbreaks 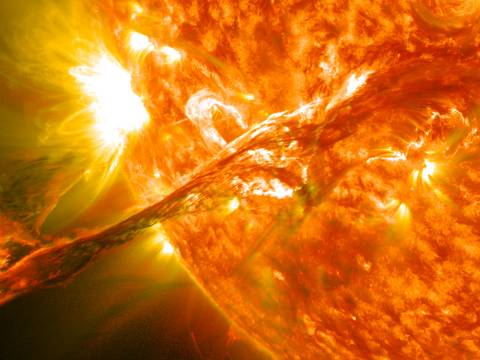 Sun spots are dark areas on the solar disk, the temperature of which is lower than the surrounding areas of the photosphere (about 4,500 degrees Kelvin and 6000 degrees Kelvin, respectively). The occurrence of such spots is due to the perturbations of the magnetic field: tube breaking the transfer of energy in some parts of the disk. It is also anticipated that sun spots can be the primary source of solar flares.

In the new work, the researchers analyzed images of a star obtained with the 1.6-metre telescope, New Solar Telescope (NST), which is a solar Observatory Big bear (BBSO) in the USA. The results showed that the plasma density in the outer layers of the solar atmosphere where there are outbreaks, about 100 million times lower than in the photosphere. This flash is capable of ten times to speed up the rotation of sunspots.

“We used to think that sunspots are caused by magnetic field perturbations. But observations show that the implementation of the magnetic energy in the solar corona can also lead to significant distortions on its surface. This phenomenon is not provided by any modern scientific concept of occurrence of solar flares,” — said study co-author Haiming Wang (Wang Haimin).

The findings may have “far reaching implications” for understanding the mechanisms that underlie the transfer of energy and momentum from solar flares, and interaction layers of the solar atmosphere, he added. It is noted that the authors of the previous works only allowed for the possibility of a reverse influence of flares and sunspots on the Sun. To confirm the hypothesis did not allow low resolution images taken by telescopes.