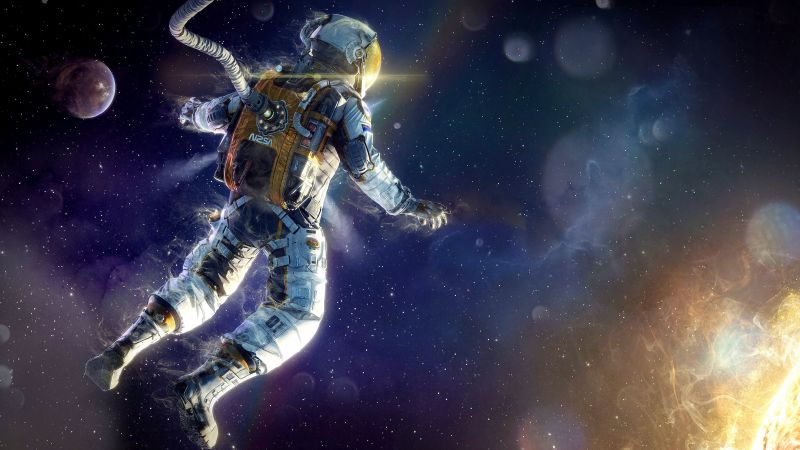 Earth is the unique cradle of all living things. Protected by its atmosphere and magnetic field, we can not think of radiation threats, except those that we create with our own hands. However, all projects of space exploration – near and far – invariably run into the problem of radiation safety. Space is hostile to life. They do not expect us there.

The orbit of the International Space Station has been raised several times, and now its height is more than 400 km. This was done in order to lead the flying laboratory from the dense layers of the atmosphere, where the molecules of gases still quite noticeably inhibit the flight and the station loses altitude. In order not to adjust the orbit too often, it would be good to raise the station even higher, but this can not be done. Approximately 500 km from the Earth, the lower (proton) radiation belt begins. A prolonged flight inside any of the radiation belts (and two of them) will be disastrous for the crews.

Nevertheless, it can not be said that at the height on which the ISS is currently flying, there is no radiation safety problem. First, in the South Atlantic region there is a so-called Brazilian, or South Atlantic, magnetic anomaly. Here the magnetic field of the Earth seems to be sagging, and with it the lower radiation belt is closer to the surface. And the ISS is still concerned, flying in this area.

Secondly, a person in space is threatened by galactic radiation-a stream of charged particles from all directions and with a huge speed generated by supernova explosions or the activity of pulsars, quasars and other abnormal stellar bodies. Part of these particles is delayed by the magnetic field of the Earth (which is one of the factors forming the radiation belts), the other part loses energy in collision with molecules of gases in the atmosphere. Something reaches the surface of the Earth, so that a small radioactive background is present on our planet absolutely everywhere. On average, a person living on Earth who does not deal with radiation sources annually receives a dose of 1 millisievert (mSv). The cosmonaut on the ISS earns 0.5-0.7 mSv. Daily! 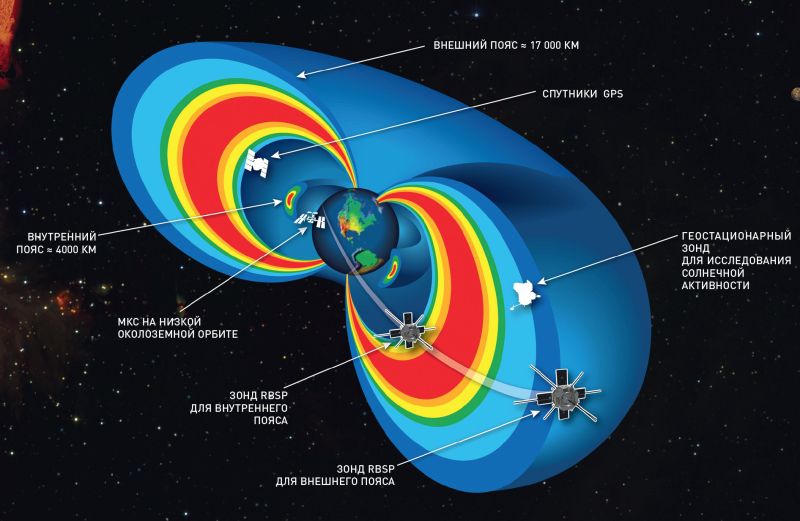 Radiation belts
The Earth’s radiation belts are regions of the magnetosphere in which high-energy charged particles accumulate. The inner belt consists mainly of protons, the outer belt consists of electrons. In 2012, NASA’s satellite opened another belt, which is located between two famous.

“We can give an interesting comparison,” says Vyacheslav Shurshakov, Ph.D. in Physics and Mathematics, head of the radiation safety department of astronauts at the Institute of Biomedical Problems of the Russian Academy of Sciences. – A permissible annual dose for an NPP employee is 20 mSv – 20 times more than an ordinary person receives. For specialists in the elimination of accidents, these specially trained people, the maximum annual dose is 200 mSv. This is 200 times more compared to the usual dose and … almost the same as the cosmonaut who has worked for the year on the ISS. ”

Currently, medicine has established the maximum dose limit, which during a person’s life can not be exceeded in order to avoid serious health problems. This is 1000 mSv, or 1 Sv. Thus, even an NPP employee with his standards can work quietly for about fifty years, without worrying about anything. The cosmonaut will exhaust his limit in just five years. But even after flying four years and gaining its legitimate 800 mSv, it is unlikely to be admitted to a new flight of one-year duration, because there will be a threat of exceeding the limit. 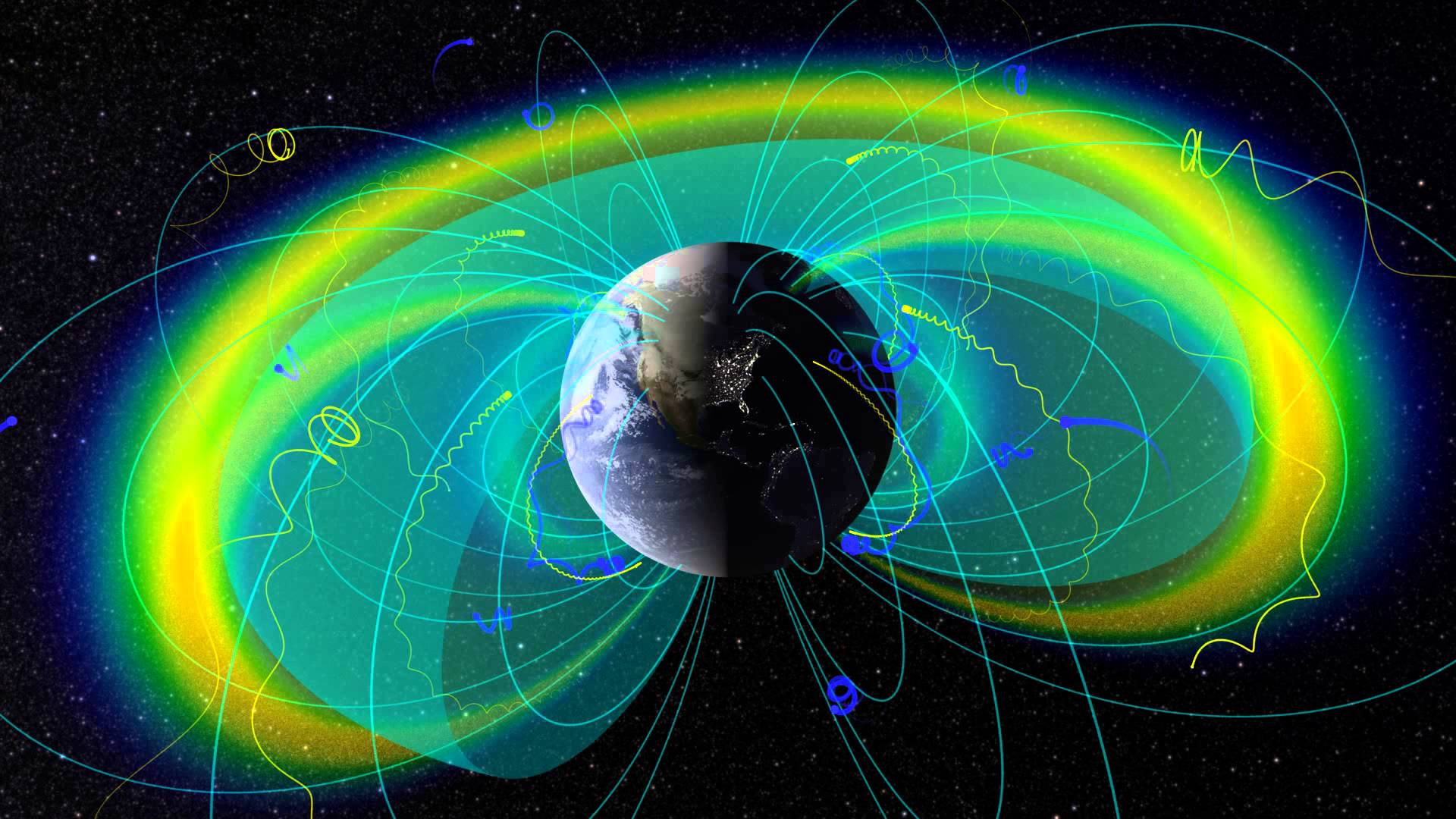 “Another factor of radiation danger in space,” explains Vyacheslav Shurshakov, “is the activity of the Sun, especially the so-called proton emissions. At the time of the ejection in a short time, the cosmonaut on the ISS can receive an additional 30 mSv. It is good that solar proton events occur rarely – 1-2 times during the 11-year cycle of solar activity. It’s bad that these processes occur stochastically, in a random order, and are difficult to predict. I do not remember such that we would be warned in advance by our science about the impending release. Usually things are different. The dosimeters on the ISS suddenly show a background increase, we call specialists on the Sun and receive confirmation: yes, there is an abnormal activity of our luminary. It is because of these sudden solar proton events that we never know exactly what dose the astronaut will bring with him from the flight. ”

Radiation problems for the crews going to Mars, will start at the Earth. A ship weighing 100 tons or more will have to be dispersed over a near-earth orbit for a long time, and part of this trajectory will pass inside the radiation belts. It’s not hours, but days and weeks. Further – going beyond the magnetosphere and galactic radiation in its pristine form, many heavy charged particles, the impact of which under the “umbrella” of the Earth’s magnetic field is felt little.

“The problem is,” says Vyacheslav Shurshakov, “that the influence of particles on the critical organs of the human body (for example, the nervous system) has been little studied today. Perhaps the radiation will cause a loss of memory for the cosmonaut, cause abnormal behavioral reactions, aggression. And it is very likely that these effects will not be tied to a specific dose. Until there is enough accumulated data on the existence of living organisms beyond the Earth’s magnetic field, it is very risky to go on long space expeditions. ”

When radiation safety specialists suggest that spacecraft designers strengthen biosecurity, they respond, it would seem, with a perfectly rational question: “What’s the problem? Did any one of the cosmonauts die from radiation sickness? “Unfortunately, the radiation doses received on board not even the starships of the future, and the usual dose of radiation to the ISS even fit into the standards, but are not harmless at all. Soviet cosmonauts for some reason never complained of seeing – apparently, rather afraid of their career, but the US data clearly show that cosmic radiation increases the risk of cataracts, clouding of the lens. Studies of the blood of astronauts demonstrate an increase in chromosomal aberrations in lymphocytes after each space flight, which in medicine is considered an oncomarker. In general, it was concluded that the lifetime allowance of an allowable dose of 1 Sv on average shortens life by three years.

Lunar Risks
One of the “strong” arguments of the supporters of the “lunar conspiracy” is the assertion that crossing the radiation belts and being on the Moon, where there is no magnetic field, would cause the imminent death of astronauts from radiation sickness. American astronauts really had to cross the Earth’s radiation belts – proton and electronic. But this took place within only a few hours, and the doses received by the Apollo crews during the missions proved to be significant, but comparable to those received by the old-timers of the ISS. “Of course, the Americans were lucky,” said Vyacheslav Shurshakov, “because during their flights there was not a single solar proton event. If this happened, astronauts would receive sublethal doses – no longer 30 mSv, but 3 Sv.

“We, specialists in the field of radiation safety,” says Vyacheslav Shurshakov, “insist that the protection of the crews be strengthened. For example, on the ISS, cosmonauts’ cabins are the most vulnerable, where they rest. There is no extra mass there, and only a metal wall several millimeters thick separates man from the outer space. If we bring this barrier to the water equivalent of radiology, it is only 1 cm of water. For comparison: the terrestrial atmosphere, under which we hide from radiation, is equivalent to 10 m of water. Recently we proposed to protect cosmonaut cabins with an additional layer of water-soaked towels and napkins, which would greatly reduce the effect of radiation. Medical aids are being developed to protect against radiation, although they are not yet used on the ISS. Perhaps in the future, by methods of medicine and genetic engineering, we can improve the human body in such a way that its critical organs are more resistant to radiation factors. But in any case, without close attention of science to this problem of long-range space flights can be forgotten. “