Crab nebula on new photos of the Chandra Observatory 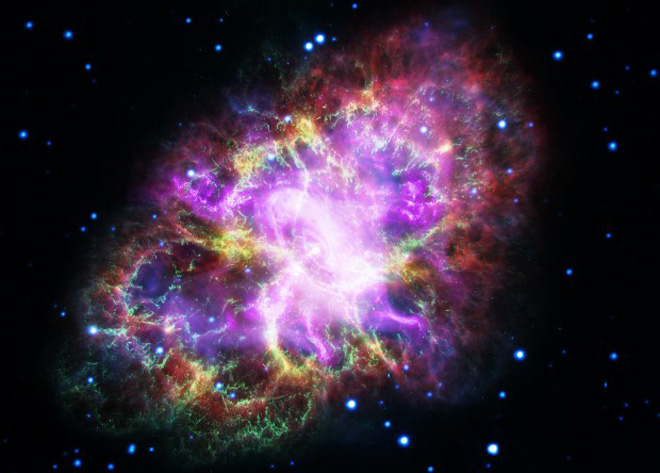 Astronomers have guided the Crab nebula cameras immediately three powerful space observatories. And the image that turned out as a result is impressive!

The gaseous nebula simultaneously took Chandra (in the x-ray range), Hubble (in infrared), and the super-large VLA antenna array (in radio bands). The received photos were combined with the images of the telescope “Ex-em-em Newton” and the archival information of the telescope “Spitzer”. The final product was an excellent composite image of the Crab Nebula.

Observations in different spectra show the processes that occur in objects. Each of the spectral ranges correlates with a certain energy of the processes. For example, research using X-ray waves corresponds to high-energy processes that are typical for quasar jets or neighborhoods of pulsars. Radio emission, on the contrary, reveals subtle electronic transitions in atoms. The ultraviolet and visible spectra “see” the relaxation of excited molecules.

In the Crab nebula, all these processes occur simultaneously, but in varying degrees. The nebula itself is what is left of the supernova explosion, namely the pulsar, which rotates at a speed of 30 revolutions per second.

Triple observation was conducted in November 2012. The Chandra telescope made an image of the central system of the Crab nebula – a pulsar and gas clouds that swirl around it. VLA and “Hubble” captured the space object completely, including, fixing a growing gas cloud.