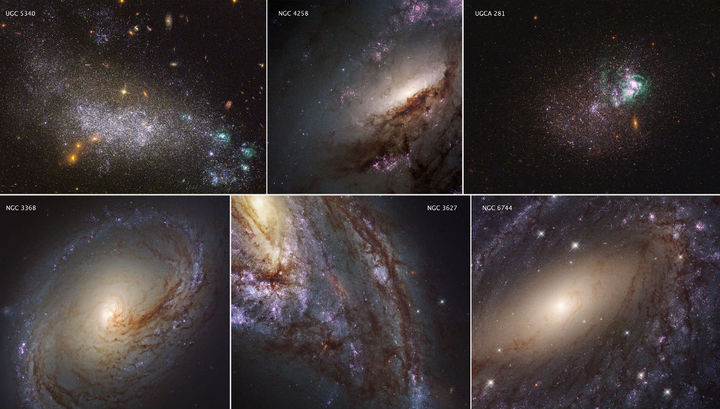 With the help of the Hubble telescope, astronomers compiled the first catalog of stars and their clusters obtained in the ultraviolet range. The review includes several dozen galaxies from the immediate vicinity of the Milky Way.

“There has never been a catalog of stars and star clusters that includes [results] of observations in ultraviolet light,” explains the head of the research team Daniela Calzetti of the University of Massachusetts. “… The combination of the two catalogs provides unprecedented opportunities for understanding [the processes] star formation “.

Let us explain that a quantum of ultraviolet radiation carries in itself more energy than a photon of visible light. Therefore, there is nothing surprising in the fact that young and hot stars are actively glowing in the UV-rays. Observing these “newborns”, specialists can restore the details of the process in which luminaries are born.

The mechanism of the formation of stars in the most general terms is known, and “Vesti.Nauka” (nauka.vesti.ru) about it was told. But the devil, as you know, lies in the details, and astronomers still have many questions concerning this topic.

“Most of the light that we receive from the universe comes from the stars, and yet we still do not understand many aspects of how stars are formed,” concludes the study’s co-author Elena Sabbi from the Space Research Institute with the help of the space telescope.

This was one of the main reasons that prompted researchers to launch the LEGUS project. The name is an abbreviation of the phrase Legacy ExtraGalactic UV Survey, that is, an “active extragalactic ultraviolet review.” The word “extragalactic” here means that objects were observed outside the Milky Way.

The objectives of the survey were carefully selected from 500 galaxies located at a distance of 11-58 million light-years from the Earth. The researchers were interested in the mass of the stellar system, the rate of star formation, and the abundance of elements heavier than helium. Also taken into account the data obtained earlier by the ultraviolet telescope GALEX.

The list contains 39 million stars. All these luminaries are massive (at least five times heavier than the Sun) and, according to astronomical measures, are young (their age ranges from 1 to 100 million years). Also in the catalogs are 8 thousand star clusters. They are also young (from 1 to 500 million years old) and massive (about ten times heavier than the largest star clusters in the Milky Way). In addition, astronomers received ultraviolet images of galaxies in general.

The solution of the mysteries of star formation is not the only goal that scientists hope to achieve thanks to a new catalog. It can also help understand how luminaries gather in spiral galaxies in their famous sleeves.

In addition, a detailed analysis of the ultraviolet glow of nearby galaxies can help in studying the most distant stellar systems that the James Webb infrared telescope is about to target. After all, their radiation, which reaches our telescopes as infrared, at the time of emission was ultraviolet, but “suffered” from the red shift. There are other puzzles, the keys to which can provide a new large-scale study.