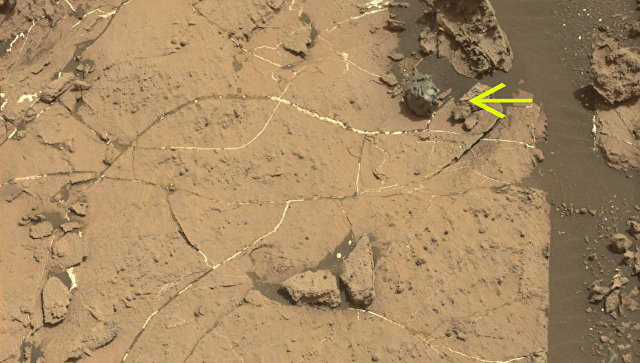 The Curiosity (NASA) mars rover has found a metal meteorite of an unusual form on the surface of the Red planet.

According to the portal, the mars rover has come across a tiny celestial body last week on the Martian mountain of Sharp. Curiosity found meteorites on Mars earlier, however this has drawn attention with the rounded shape with ideally smooth surface and deep furrows. Diameter of the meteorite which has received the name Egg Rock makes 4 centimeters.

Scientists of Arizona State University in the USA assume that the found meteorite consists from nickel-iron. Egg Rock belonged to a belt of asteroids of Mars earlier. Thanks to the Martian conditions the meteorites which have fallen to the surface of the planet can keep the original state millions of years as they aren’t oxidized there, reports the portal.

The six-wheel rover Curiosity, three meters long and weighing about 900 kilograms, has gone to Mars in November, 2011 and on August 6, 2012 has reached the surface of “the red planet” around Gale’s crater. Exact completion date of a mission of the mars rover isn’t called, but his main mission has been calculated on one Martian year, or 687 terrestrial days.