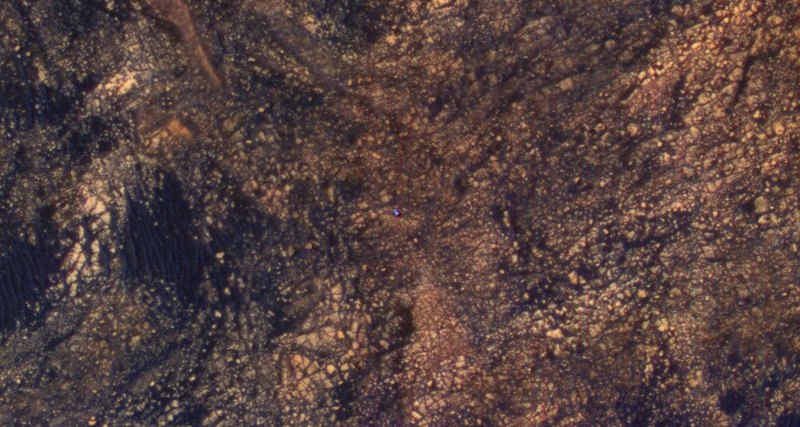 After nearly five years of painstaking work, the Curiosity rover continues to explore the Red Planet. Several times a year, scientists make his orbital snapshot to be aware of the events.

Someone might think that this brown image depicts a summer garden, but it is not. In fact, this is the surface of Mars, and that blue, faintly discernable on the background point – the famous Mars Curiosity rover. The robot, whose lifespan is almost five years ago, has never looked so alone.

This picture was taken on June 5, 2017 with a camera on board the orbiter Mars Reconnaissance Orbiter, which, according to NASA, every year makes a few pictures of the brave explorer of the Red Planet. In this photo, Curiosity goes uphill, exploring the exposed clusters of hematite. Yes, five years later, the mission’s operators are still looking for traces of life on Mars.

Someone may think that the colors in the photo are too contrasting and saturated – that’s it. This contrast is necessary to identify differences in the surface layers of the Martian rock, which makes it easier for scientists to work and makes the rover more blue than it really is.