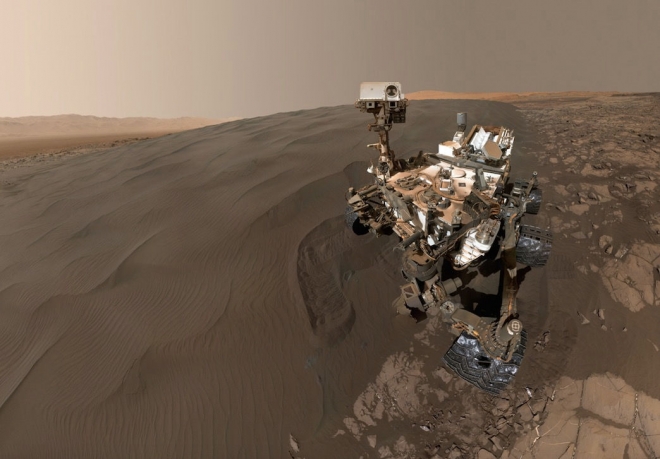 The atmosphere of Mars is about 100 times thinner than on Earth, but nevertheless its thickness enough to maintain the weather, clouds and vortexes, which, according to NASA, represented the dominant force of the formation of the landscape of the red planet.

Analyzing data collected by the Curiosity Rover and MRO probe, the scientists found that the Martian winds for billions of years, slowly carried away the dust and sediment from Gale crater, forming at its center a layered hill with a height of 5.5 km, known as mount sharp.

The reaches Gale crater 154 km in diameter and is following from a fallen 3.6 billion years ago, asteroid or comet. Later, the ancient river preserved in the basin sediments, including rocks, silt and sand, filling it to the brim. Then, when the climate became drier, the wind has eroded sedimentary rocks.

“In 2000, scientists first suggested that the hill in the center of Gale crater is the result of wind erosion of the rocks of the once full pool. According to the new calculations, the large volume of removed material is about 64,000 cubic km is consistent with orbital observations of wind effects in and around the crater, multiplied by a billion years or more,” — said NASA.

At the end of 2015 and early 2016 “Curiosity” has explored the dunes of the crater in the shape of a Crescent. The latest work of the Rover focused on a group of ribbon-like linear dunes, as the Red planet comes into the summer season is the most windy time of the year. “In these linear dunes and sand transported along the lanes, while the tape can fluctuate back and forth, side to side,” said team member Nathan bridges.

While “Curiosity” is on the lower slopes of mount sharp, it will continue to study the movement and composition of particles of linear sand dunes. On the latest images from the Rover is the small ripples on the sand, measuring about 2.5 cm on the leeward side, and dust whirlwinds, sweeping through the landscape of the crater, said NASA officials.

“We hold Curiosity in an area with lots of sand in those seasons when it is especially windy — said Ashwin vasavada of the jet propulsion Laboratory of NASA in Pasadena. One of our goals is to figure out how the winds affect the sorting of sand grains with different composition. This helps us to interpret the modern dunes, and ancient sandstones”.

Take a look at these amazing dust devils and other creations of the Martian winds.