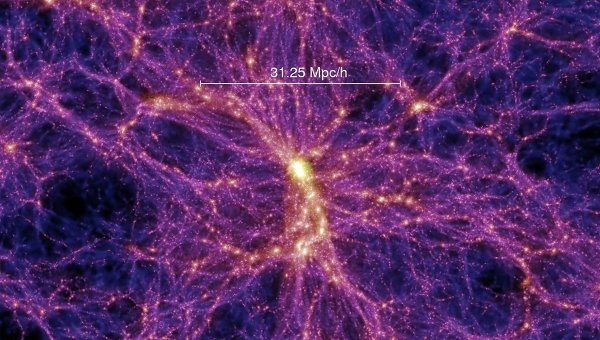 Observation of millions of distant galaxies helped astronomers to prove that dark energy, a mysterious substance that is causing the Universe to expand with acceleration, does exist, and that the recession of galaxies from each other cannot be explained in any other way.

In addition to the visible matter which makes up all the stars, planets and galaxies, in the Universe there are two more “invisible” type of matter – dark matter that holds stars and gas inside galaxies in place, and dark energy, forcing them to withdraw from each other, with an increasing speed. The share of dark matter accounts for about 25% of the mass of the Universe, dark energy is about 70% and less than 5% — the share of visible matter.

As they say, Suhua fan (Zuhui Fan) from Peking University (China) and his colleagues, today most cosmologists and astronomers believe that both form dark substances exist, despite the fact that we know almost nothing about the properties of dark matter, and nothing about dark energy.

However, not all scientists agree that the explanation of the universe we need those not yet validated forms of matter. For example, in 2007 there was an interesting sub-set of alternative theories of gravity f(R), which explains the receding of the galaxies from each other what the fabric of space-time may respond differently to weak and strong gravitational force.

This theory, as explained by fan, to prove and disprove extremely difficult, as they require observation of virtually the entire history of the Universe. The authors attempted to validate them using observational data for the near and distant clusters of galaxies, which was conducted over the last decade with the help of the CFHT telescope in Hawaii.

Scientists were interested in how the mass of large galaxies and clusters of galaxies distorts the light rays passing through them or through their surroundings. This effect, which physicists call gravitational lensing, allows you to accurately determine the masses of distant galaxies and to assess the speed with which they are removed or converging with the Milky Way.

In total, the scientists calculated the mass of the 5.5 million galaxies and clusters of galaxies, and their rate of divergence. These calculations showed almost 100% certainty that their “recession” was to blame for the dark matter and the forces that are described by almost all f(R) theories of gravity.

As they note, this does not exclude completely the possibility of the existence of alternative explanations for the expansion of the Universe, however, these observations are driving such theories in such a deep angle that their credibility drops to near zero.

The construction and future of the Observatory of the new generation, such as ground-based LSST telescope in Chile and orbiting telescopes WFIRST and Euclid”, which will be launched in 30 years of this century, according to cosmologists, will put the final point in this argument if astrophysicists will not be able to find more direct evidence of the existence or otherwise of dark energy.