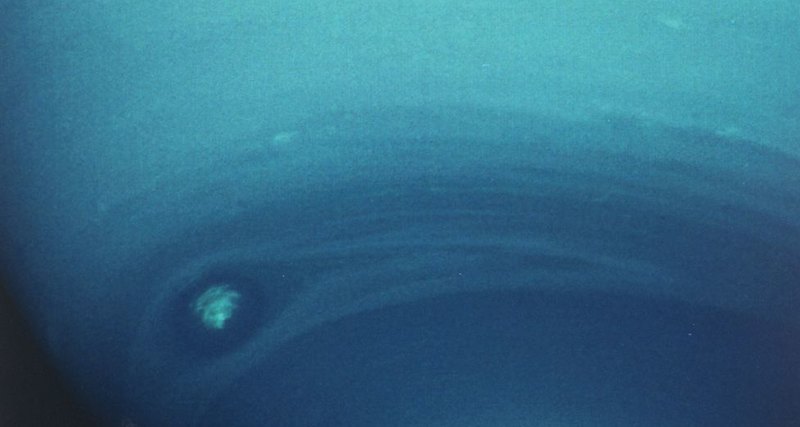 Like Jupiter, a mysterious anomaly hides on the surface of Neptune. With the help of the Hubble telescope, NASA astronomers for the first time managed to see that the strange whirlwind on Neptune is gradually decreasing in size.

An unusual weather phenomenon on Neptune is officially called the “dark whirlwind,” and in some ways it resembles the Great Red Spot of Jupiter. Like the OPF, the dark vortex moves in the anticyclone direction, “sweeping” the frozen fragments of various substances from the planet’s atmosphere. Agustín Sánchez-Lavega (Agustín Sánchez-Lavega) from the University of the Basque Country in Spain explains that scientists currently do not have information on how such vortices form and how quickly they spin. He suggested that weather anomalies arise due to the instability of the winds that blow west and east.

Unlike the OPF, which is more than 200 years old, Neptune’s dark whirlwind became visible only in the last few years. If NASA’s guess is correct and it consists mainly of hydrogen sulfide, then the vortex must also emit a strong smell of rotten eggs. In addition, the whirlwind on Neptune is the first of such anticyclones, which shows signs of gradual extinction. When it was first discovered in 2015, its diameter was 5,000 km, and in the Hubble telescope images in October 2017, this distance decreased to 3,700 km. In addition, contrary to the expectations of scientists, as the extinction of the vortex does not move on the surface of the planet.

Michael H. Wong from UC Berkeley, referring to previous work done at the University of Louisville, talks about the discrepancy between the mathematical model and the real picture that astronomers observe with a telescope. According to preliminary calculations, the vortex had to drift slowly towards the equator and, having reached it, spectacularly dissolve with the release of a large number of clouds. However, the anomaly, apparently, chose to slowly die away and move not toward the equator, but toward the south pole of the planet. Nowadays, scientists cannot say with certainty when exactly the dark whirlwind on Neptune will disappear completely: except for Hubble and Voyager, no other research instruments have observed such a vortex activity. Probably, the launch of the telescope named after James Webb in the near future will shed light on this riddle.